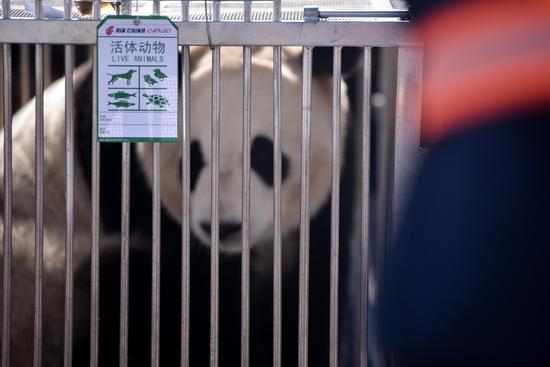 Two pandas arrived at Caojiapu Airport in Xining, capital of northwest China's Qinghai Province, Monday, becoming the first pandas to settle down in the plateau city.

The two pandas, named Hexing and Shuangxin, were from the Chengdu Research Base of Giant Panda Breeding. After their arrival, they were transported to the panda house in the Qinghai-Tibet Plateau Wild Zoo in Xining.

Two more pandas will arrive in Xining Wednesday, according to a source of the zoo. Qinghai Province will launch a series of education activities about giant pandas in the following three years.

To make the pandas adapt well to the climate and environment of the Qinghai-Tibet Plateau, the zoo has arranged individual outdoor and indoor spaces and a rest area for each panda.

A 30-square-meter room for fresh bamboo storage has also been built in the panda house. To ensure the freshness of the bamboo, all the bamboo will be transported to the zoo regularly by air.

The zoo will conduct physical checks for the pandas every month. The panda house in the Qinghai-Tibet Plateau Wild Zoo is scheduled to open to the public later this month.