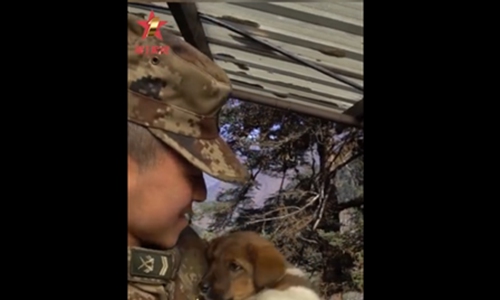 An isolated PLA soldier play with his poppy. (Photo/Screenshot of video posted on Sina Weibo)

Lonely, isolated PLA soldiers stationed at a small border post high up a mountain in a county in Southwest China's Tibet Autonomous Region have adopted a puppy and a cat to keep them company, according to a sentimental video posted on Sina Weibo by CCTV News.

The border post is named after its elevation, which is 3,197 meters above sea level, and is situated at the top of a cliff near Zhari village of Longzi county.

Soldiers stationed at the 30-square-meter border post have to carry up all of their supplies including water sets of stairs, some of which appear to ascend at an angle of 70 degrees, according to the video which includes a sound track of a slow, lonely-hearts ballad.

The video also doesn't mention how many soldiers are stationed at the post, the duration of their posting or which border they are protecting.

In one scene a soldier is heard calling to a peer, asking him to come and see a puppy he is cuddling that has apparently been carried up to the post.

A rather scruffy cat also makes an appearance in the video, which suggests the animals have been assigned to the post to help alleviate the soldiers' loneliness.

Netizens were touched by the soldiers' efforts to guard the border.

"Thank you for your guardianship at the faraway boarder so that we can have peace and stability," a netizen commented.