Studying the ancients pays off for hungry students 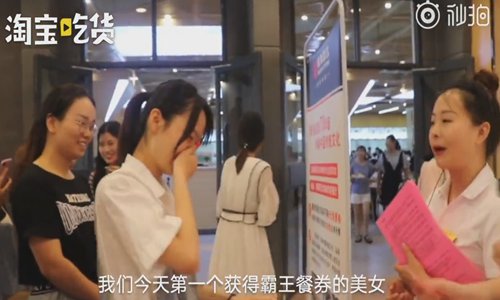 Students line up at the entrance of a cafeteria at the Henan Normal University in Xinxiang, Central China's Henan Province for their chance to wear a discount coupon for correctly reciting a traditional Chinese poem chosen at random. (Photo/Screenshot from video posted by Taobao Chi Huo)

Finally, there's a payoff for liberal arts students at a university cafeteria in Central China that is giving discount coupons to any student who can recite lines from a randomly selected ancient Chinese poem.

Many students are seen lining up at the entrance of a cafeteria at the Henan Normal University in Xinxiang, Henan Province to test their knowledge, according to a video posted by Taobao Chi Huo on Sina Weibo on Wednesday.

They can choose from classical Chinese poetry or sayings from the Confucius Analects, and if they recite the words correctly they are given a coupon worth nine yuan ($1.3), which is likely enough for one hearty dish.

"It's a piece of cake," said a punny student who passed the challenge.

"I would have studied harder if I had known the knowledge could actually get me real food one day," said another student who learned that figuratively and literally there really is no free lunch.

The manager of the cafeteria said two to three hundred students participate in quiz every day.

"It is an unfair game as liberal arts students have advantages over those in science and engineering," said another student. "Hope cafeteria has math, physics, or even chemical problems for us to solve next time."

"It is really a good way to promote traditional Chinese culture and benefit the students at the same time," a netizen commented.