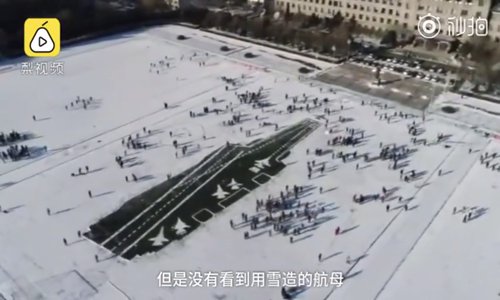 Students use shovels and their feet to tamp down snow and they also created five aircraft on the carrier's deck. (Screenshot photo)

An outline of China's Liaoning aircraft carrier made of snow by college students has become a hit at the Harbin Institute of Technology in Heilongjiang Province.

The students made the aircraft carrier by packing snow to outline the ship on their campus' sports field.

The snow sketch is more than 75 meters long and 15 meters wide.

Using shovels and their feet to tamp down snow they also created five aircraft on the carrier's deck. The number 16 on the side of the ship leaves no doubt that the students have depicted the Liaoning, as the carrier's designation number has become synonymous with the pride of the PLA Navy's fleet of ships.

"As a student from South China, it is an amazing experience for me to make this with snow," said a student named Fang Bobo.

"I can boast to all my friends back home that I have built an aircraft carrier," he said.

"It looks pretty similar to the real thing on TV," said one of the visitors attracted to the campus.