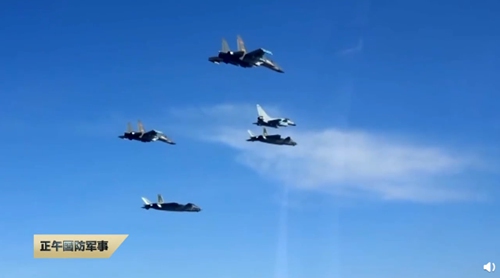 The “three musketeers of the sky” – the J-20, J-16 and J-10C – fly in formation in a real-combat scenario training session. (Photo/Screenshot from China Central Television)

China's most advanced J-20 stealth fighter jets assigned to an ace unit have been conducting real-combat scenario training together with powerful J-16 and agile J-10C jets, the People's Liberation Army (PLA) Air Force revealed, as a Chinese expert said Monday the combination can conjure a kaleidoscope of tactics to safeguard the country.

This is an indication that the J-20 jets are making smooth progress in the air force, as their service has entered a new stage of comprehensive combat capability, military experts said.

The video also showed for the first time the J-20, J-16 and J-10C, dubbed the "three musketeers of the sky," taking off and conducting real-combat scenario training together. Two J-20s, two J-16s and one J-10C formed a combat formation, according to the video.

Air defense expert Fu Qianshao told the Global Times on Monday that the air force has been exploring tactics with the J-20 and other fighter jets in previous mock competitive training and has gained some experience in acquiring air superiority, land attack and sea attack.

While the J-20 is more advanced than the J-16 and J-10C, they share advanced technologies like avionics and active electronically scanned array radars, according to Fu.

The J-16, the least stealthy of the three, can lead an attack and openly use radar to detect targets and attract enemy attention, while the stealthy J-20s can lurk nearby and launch surprise missile attacks when hostile targets engage the J-16, Fu said, noting that the J-10C, when equipped with the domestically developed thrust vector control engine, will excel at close-quarters dogfights thanks to super maneuverability.

Another tactic is to first have the J-20 destroy hostile strategic hubs, including early warning aircraft and aerial tankers, using their stealth capability, and then the heavily loaded J-16 can strike enemy ground forces including mobile radar stations as the J-10C takes over air supremacy, experts told the Global Times.

The J-20 has a kaleidoscope of tactics to fulfill their missions and more mock combat exercises should be conducted, Fu said, noting he also expects electronic warfare aircraft to accompany the J-20.