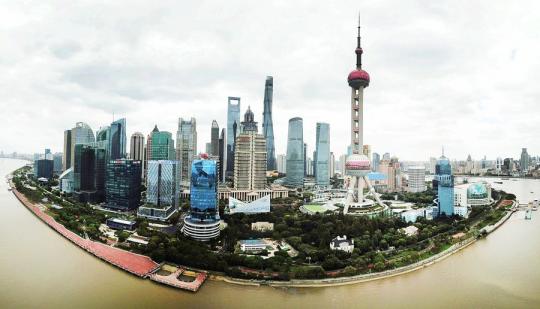 Aerial photo taken on Oct. 15, 2019 shows a view of the Lujiazui area in Shanghai. (Photo/Xinhua)

Encouraging economic data for December will cement the potential uptrend of China's A-share market in 2020, as a confirmed picture of economic stability has bolstered expectations of a recovery in corporate earnings growth, analysts said.

The benchmark Shanghai Composite Index jumped by nearly 15 points to Friday's intraday high of 3,091.95 points on China's release of 6 percent GDP growth for the fourth quarter of last year, which broke a five-quarter streak of economic slowdown.

"December's industrial production and retail sales figures topped estimates, confirming the picture of an economy that has bottomed out," he said.

The growth in industrial output quickened to 6.9 percent year-on-year last month, the second consecutive month, while retail sales growth remained as high as 8 percent last month, the same as November, according to the National Bureau of Statistics.

Whole-year fixed-asset investment growth stood at 5.4 percent, 0.2 percentage points quicker than the first 11 months, as manufacturers ramped up investment, according to the NBS.

Looking ahead, economic activity should remain on a stabilizing trajectory this year and lead to annual GDP growth of about 6 percent, given the resolute pro-growth policy efforts and easing external pressures after the signing of the phase-one trade deal with the United States, said Tang Jianwei, chief researcher at Bank of Communications' Financial Research Center.

Wendy Liu, head of China Strategy at UBS Investment Research, said: "The benchmark CSI 300 Index is expected to see a 6 percent rise over the course of the year."

"A stabilizing Chinese economy will bring about the recovery in listed firms' earnings growth in 2020, and we are now in such a transition," Liu said.

The net total of funds flowing into the A-share market may increase to almost 500 billion yuan ($73 billion) this year, Zhang said, adding that he expects a quicker expansion of equity-focused mutual funds and a continuous inflow of foreign money, although this will be slower than in 2019.

The China Securities Regulatory Commission, the nation's top securities regulator, said after the close of its annual work conference on Friday that it will work to attract long-term capital including equity funds this year, while also advancing capital market opening-up.

Cyclical stocks, which are sensitive to macroeconomic changes, may outperform the market, such as those who engage in construction materials and machinery and therefore benefit from faster infrastructure investment, according to Xie Chao, chief strategist at Shanghai-based Everbright Securities.

However, analysts with Essence Securities said in a report that cyclical stocks may not provide so much room to gain in the mid to long term as stocks in the tech and medical sectors do, as the A-share market is increasingly aimed at supporting economic upgrading.

The CSRC said on Friday it would advance market-oriented and rule-based reforms to better serve high-quality economic development this year.