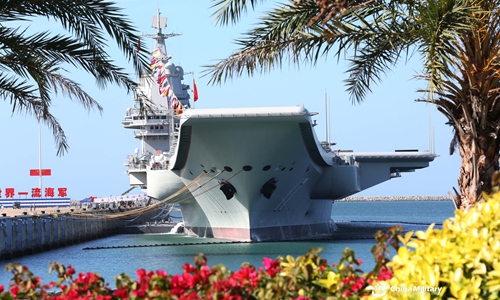 The voyage is possibly a part of a routine exercise or normal relocation, and the Sanya-based warship will come and go in the region often as such transits will likely become routine, Chinese mainland experts said.

Accompanied by escort vessels, the domestically developed aircraft carrier sailed through the Straits from south to north on Thursday afternoon, a Taipei-based news website reported on Thursday, citing the defense authority for the island of Taiwan.

The Shandong was commissioned into the PLA Navy on December 17 with a grand ceremony held at a naval base in Sanya, South China's Hainan Province, making Thursday's visit to the Taiwan Straits its apparent first mission with the PLA Navy.

This is the second time the warship has passed through the Straits. On November 17, the carrier sailed through from north to south, with the start point Dalian Shipyard in Northeast China's Liaoning Province, where it was built, and its destination the naval base in Sanya.

Xu Guangyu, a senior adviser to the China Arms Control and Disarmament Association, told the Global Times on Thursday that the carrier's voyage was likely an exercise now as the navy has its hands on it, making it a "normal maritime activity" for the warship.

Based in Sanya, the Shandong needs to sail through the Taiwan Straits "from a geographical point of view" if it wants to go to places like China's other aircraft carrier base in Qingdao, East China's Shandong Province, or its birthplace, the Dalian Shipyard, Xu said.

Li Jie, a Beijing-based naval expert, told the Global Times on Thursday that the destination of this trip was more likely to be the Dalian Shipyard.

A spokesperson of the PLA Navy said when the carrier sailed through the Taiwan Straits for the first time in November that voyage was cross-regional testing and training, which means the entire voyage from Dalian to Sanya was part of a sea trial, Li said.

That trial involved for long distances, deep waters, high temperatures, humidity and salinity, making it the most complicated sea trial the Shandong ever faced, he noted.

The Shandong also used new weapons and technical equipment that may have needed calibrations and adjustments after the trial, Li said.

Li said that if this was the case, it by no means indicated the Shandong had technical issues.

"It's like a new car that just traveled long distance and the driver wants to take it back for maintenance," he said.

Defense Ministry spokesperson Wu Qian said on Thursday at a routine press conference that "everything is well" in terms of the Shandong's condition after its commissioning.

The Shandong will continue to run tests and conduct training by teaming up with other vessels, and will form a systematic combat capability through training, Wu said.

Any minor adjustments before that should be considered normal and will contribute to the warship's combat readiness, they say.

The Shandong sailed the Taiwan Straits twice in more than a month, and such passages will become more frequent or even routine, experts predicted.

The location of the Sanya naval base means not only this time, but every time the Shandong wants to go north, it will likely pass the Taiwan Straits, Xu said, noting the carrier would eventually sail into the West Pacific from the eastern side of the Taiwan island.

Li too believed the Shandong could conduct training by sailing through the first island chain.

"Even if it is not this time, it is only a matter of time before the Shandong cruises into the Pacific Ocean, Indian Ocean and waters farther away," Li said.