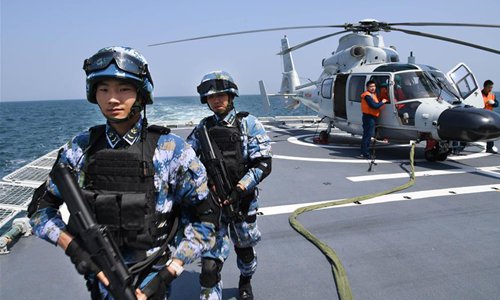 China is sending its troops to Pakistan for a month-long joint military exercise, a move that will boost the two countries' military cooperation and capability to jointly deal with terrorist threats including those targeting joint projects with China, experts said on Monday.

A Chinese unit from a special forces brigade of the People's Liberation Army Xinjiang Military Region departed from their base camp Saturday morning and began mobilizing in Pakistan for the "Warrior VII" joint exercise, using vehicles and aerial transportation, according to a statement released on Monday by China's Ministry of National Defense.

This is the seventh "Warrior" series exercise between the two countries' special forces, the ministry said, noting that the drills will focus on deepening cooperation and communication, learning from each other's combat experience and boosting the ability to deal with security threats and launch diversified missions.

A new exercise subject, joint defense of key facilities, will be added to the drills, as troops will engage in counter-terrorism in mountainous areas, according to the statement.

Li Wei, a counter-terrorism expert at the China Institute of Contemporary International Relations in Beijing, told the Global Times on Monday that key facilities might include iconic government and civilian buildings and major projects under the China-Pakistan Economic Corridor, as these could be targets for terrorists, based on past events.

The joint exercise will help to strengthen weak spots and find ways to prevent attacks in the first place, Li said.

The drills will feature live ammunition that will put both commanders' and soldiers' capabilities to the test, said Yang Lei, commander of the Chinese unit, in the defense ministry statement, noting that the event will enrich military training cooperation and deepen the traditional friendship between the Chinese and Pakistani armies.

Chinese and Pakistani air forces wrapped up the half-month-long Shaheen VIII joint exercises, featuring some of the two countries' top aircraft, in northwestern China in August. The two countries will also hold a joint naval exercise in Pakistani waters in January.