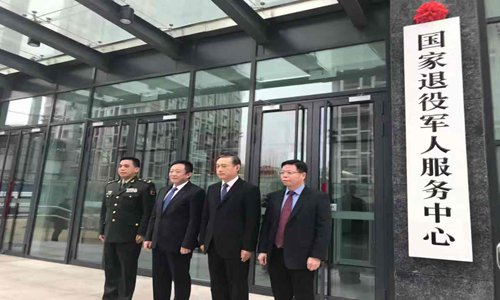 The state service center for veterans was set up on Tuesday in Beijing. (Photo: Guo Yuandan/GT)

China established the state service center for veterans on Tuesday, which aims to support veterans' employment, improve their welfare and guarantee their rights and interests.

The service center for ex-servicemen will mainly help them find jobs or start up their own businesses, and assist them with preferential treatments.

As a key component of the veterans' service and security system, the center also undertakes work such as dealing with petition letters and visits of veterans, the Xinhua News Agency reported on Tuesday.

The service center for veterans will be fully established at all levels from provinces to villages in China, which reflects the government's increasing attention on the placement of ex-servicemen after the Ministry of Veterans Affairs was set up in 2018.

China is now paying more attention to helping ex-servicemen with new jobs. For example, of the veterans who accepted government placement, more than 80 percent have been given new positions in government organs, public institutions and state-owned companies, Xinhua reported in September 2018. More than 80,000 former military officers were offered civilian jobs and over 400,000 retired soldiers were resettled in 2018 by local governments, said Wang Zhiming, a spokesman for the ministry at a January press conference, Xinhua reported.

The newly established center will also attempt to resolve the appeals of veterans who had disputes with local governments over their placement. Police detained 10 people for staging illegal demonstrations and violently assaulting police in the name of "military veterans" in Pingdu, East China's Shandong Province in October 2018.