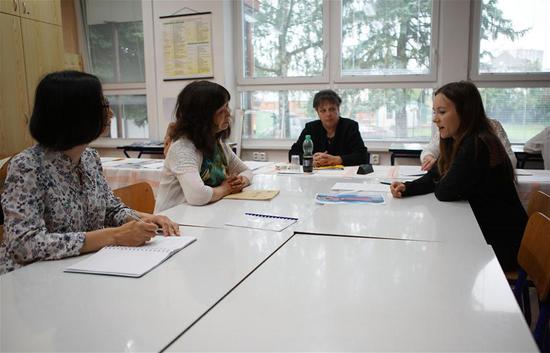 A student (R) attends a test on oral Chinese in the graduation test in Hradec Kralove, the Czech Republic, June 19, 2020. (Photo by Dana Kesnerova/Xinhua)

Nikol Kremenakova and her classmate Laura Mecavova, both fourth-grade students in a Czech high school, became the first in their country on Friday by taking a test in Chinese for their graduation exams.

Both students have been studying at the First Private Language High School (1SJG) in Hradec Kralove, a small city in eastern Czech Republic.

Kremenakova and Mecavova have chosen Chinese as their graduation exam subject, which meant Chinese was included in the Czech high school graduation system for the first time.

Friday's Chinese speaking test is divided into two parts -- impromptu introduction and picture description. Nicole has to draw from 25 topics to give an oral introduction, and describe the selected pictures in Chinese.

Nikol's first topic was "Your Future". In her introduction, she talked about her plan for the future in Chinese, not so fluent, but understandable. She talked about keeping dogs, eating healthy, and maybe going to China to further her studies.

"I went to Shanghai last year, it's beautiful. I fell in love with it immediately," she said, adding that she has already planned to apply for the Chinese major at the famed Palacky University.

When talking about the picture of two people dancing, Nikol gave the male character in the picture a Chinese name "Ma Ming" and the female character a Czech name "Anna". "They are dancing happily," she said in Chinese.

"There's a lot to improve for her," said Liu Wei, her Chinese teacher who is on the panel of judges. "But she did pretty well today, excellent I should say. I hope she could have the opportunity to continue learning Chinese."

At the end of the test, the panel gave an "excellent" score both for her and her classmate. For the first time in the Czech Republic, there were two students who graduated with Chinese as a foreign language.

"I want to provide my students more possibilities for their future," said Ladislav Bartuska, headmaster of the school, explaining why he applied to the Czech Ministry of Education for listing Chinese as a compulsory course in his school five years ago.

"China is a big country which enjoys rapid economic development. I think it's normal the language would be spoken more. You might not see Chinese being spoken in a small town like Hradec Kralove in everyday life, but I'm sure learning Chinese will give these students a more competitive edge in the future as economic and trade relations with China grow," Bartuska added.