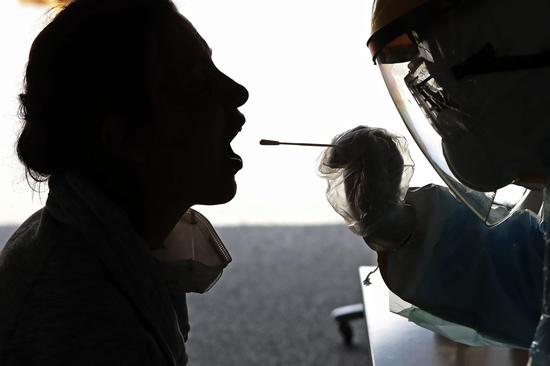 A nucleic acid test for the coronavirus using a throat swab is conducted on an inbound traveler upon arrival in Shanghai at a testing site in Changning district on Monday. (YIN LIQIN/CHINA NEWS SERVICE)

Nearly 10 hours after landing at Shanghai Pudong International Airport on Saturday, a woman from the city, surnamed Wang, as well as her daughter and 2-month-old grandson, finally arrived at a park in Changning district, where her home is also located.

The three arrived in Shanghai after setting out from Houston in the United States, changing planes in Los Angeles.

They underwent epidemiological investigation by customs officials at the airport. They also took nucleic acid tests for the novel coronavirus at a makeshift tent clinic at the park, and waited for up to eight hours for the results.

After testing negative, they were escorted home in designated vehicles by neighborhood committee workers to start 14 days of quarantine, since the US had been listed by Shanghai authorities as one of the 24 countries severely affected by the pandemic.

"It was a long and tiring journey," said Wang, who is in her late 50s and has spent the past five months living with her daughter in Houston. "But from another perspective, this was exactly why we chose to return at this time－to reassure ourselves about our health."

On Tuesday, Beijing ordered all arrivals from overseas to be quarantined in hotels and to undergo nucleic acid tests beginning on Wednesday, as the number of imported cases continued to rise in the city. China reported 74 new confirmed cases on Monday, 31 of them in the capital.