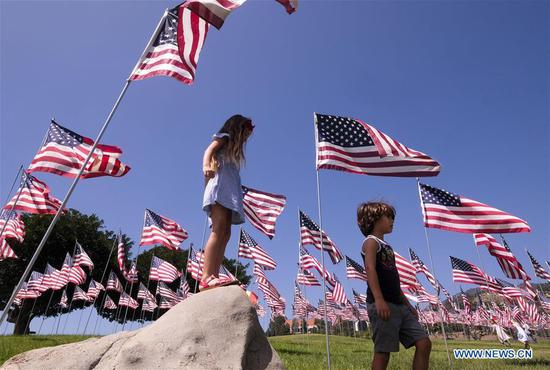 Children play among U.S. national flags erected to honor the victims of the September 11, 2001 attacks in New York, at the campus of Pepperdine University in Malibu, the United States, Sept. 10, 2018. (Photo/Xinhua)

Silence was observed at around 10 o'clock on Tuesday morning at John F. Kennedy International Airport, where passengers flying in and out of New York City as well as airport staff took a minute to mourn those who lost their lives in the deadly 9/11 terrorist attacks.

Seventeen years on, the wound that was left when twin towers went down is still there, deep and painful.

Nearly 3,000 people were killed when four hijacked planes hit the World Trade Center Twin Towers in New York, the Pentagon near Washington D.C. and a field near Shanksville in Pennsylvania on Sept. 11, 2001.

Commemorative activities were held in multiple places in New York City on Tuesday.

At "Ground Zero," where the World Trade Center towers once stood, thousands of victims' relatives, survivors, and rescuers attended the annual ceremony.

The reading of names proceeded with six pauses of silence, each marking a time when the planes hit the two towers and the Pentagon, when another crashed in Pennsylvania, and when the towers crashed.

Jean Pandolfi, a retired captain at New York City Fire Department (FDNY) Ladder Company 3, tried to come to the ceremony every year. He was off duty on the morning of the attacks and did not get there till 10:45, but he lost a lot of close friends that day.

Every time Pandolfi comes to the site, he pays tribute to John McAvoy, a member of the Ladder Company 3 who was in the south tower operating when the building came down.

"I will forever mourn his loss, because he is my closest friend," he said.

For Pandolfi, the site that has turned into a tourist attraction in some sense is forever a hallowed ground.

"As hard as we try, the horror of that day seeps in, especially on this day, and reminds us why we're here," said the FDNY Commissioner Daniel Nigro.

Some 343 firefighters in New York City who responded to the World Trade Center died on Sept. 11, 2001.

FDNY members and family gathered for a remembrance ceremony at FDNY headquarters in Brooklyn.

At sunset, New Yorkers and visitors across the world gathered in lower Manhattan as the FDNY Emerald Society Pipes and Drums started their annual tribute at Engine 10 and Ladder 10.

As an annual ritual, Tribute in Light was again lit from dusk to dawn this year.

Assembled on the roof of the Battery Parking Garage south of the 9/11 Memorial, the twin beams reach up to four miles into the sky and comprise 88 7,000-watt xenon light bulbs positioned into two 48-foot squares, reflecting the shape and orientation of the Twin Towers.

While the wound may never heal, New Yorkers are trying to look ahead.

Just days before the 17th anniversary, Cortlandt Street subway station on the No.1 line was reopened to the public.

When the twin towers fell on Sept. 11, 2001, they came crashing down on the station, burying it with debris.

After being unused for almost 17 years, the station that was once achingly missing from the New York city transit map is now back, symbolizing the city's hope that such tragedies would never happen again.