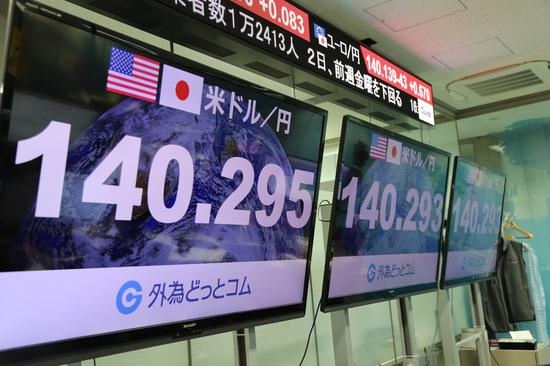 A display shows an exchange rate between the Japanese yen and the U.S. dollar at a foreign exchange brokerage in Tokyo, Japan, on Sept. 2, 2022.(Photo by Gong Xiuxi/Xinhua)

The Japanese government on Thursday took steps to intervene in the foreign exchange market to stem the yen's decline for the first time since 1998, according to a senior Finance Ministry official.

Masato Kanda, vice finance minister for international affairs, told the press that the government "took a decisive step" by confirming such intervention.

Earlier in the day, Kanda said Japan could intervene in the foreign exchange market "anytime" to prevent the yen from falling further, and the yen rose sharply against the dollar on Thursday upon the intervention.

Despite the Federal Reserve's decision to raise its key policy rate, the Japanese central bank announced to maintain its easing monetary policy at the end of a two-day policy meeting.

After the Tokyo market's close, Haruhiko Kuroda, governor of the Bank of Japan, rejected the idea of raising interest rates in the near future at a press conference, noting that the country's economic recovery from the COVID-19 pandemic is only halfway despite soaring inflation.