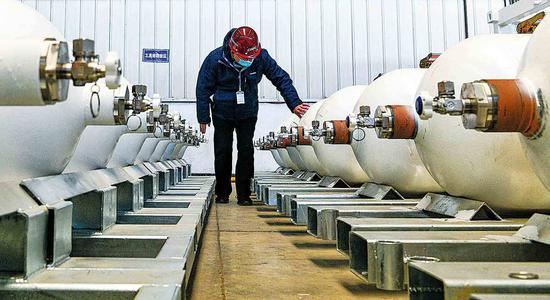 A worker checks on hydrogen tanks slated for use at the Beijing Winter Olympics and Paralympics at a factory in Shijiazhuang, Hebei province, on Nov 11. (Photo: Li Mingfa for China Daily)

The National Development and Reform Commission, China's top economic regulator, in association with the National Energy Administration, on Wednesday unveiled the country's first medium- to long-term (2021-35) plan to promote high-quality development of the hydrogen industry.

Officials and experts said it is part of China's larger drive to build a clean, safe and efficient energy system, marking the country's latest move to achieve its goal of peaking carbon dioxide emissions by 2030 and achieving carbon neutrality by 2060.

Under the plan, China will seek to have around 50,000 hydrogen-fueled vehicles and a batch of hydrogen fueling stations by 2025.By then, the country aims to produce 100,000 metric tons to 200,000 tons of hydrogen generated from renewable energy sources a year, reducing carbon dioxide emissions by 1 million tons to 2 million tons a year.

According to the plan, a relatively complete hydrogen industry technology innovation system as well as the clean energy-based hydrogen production and supply system will be formed by 2030, which will help in meeting the carbon peak goal.

By 2035, the share of hydrogen generated from renewable energy resources in the final energy consumption will be significantly expanded.

Wang Xiang, deputy director of the Department of Innovation and High-Tech Development at the NDRC, said development of the hydrogen industry will help the energy industry to transition to a green and low-carbon future.

More efforts will be made to promote high-quality development of the hydrogen industry, including building a supporting platform to boost industrial innovation, constructing hydrogen infrastructure and promoting hydrogen applications in fields like transportation and industry, the plan stated.

Ouyang Minggao, an academician at the Chinese Academy of Sciences and a professor at Tsinghua University, said the long-awaited medium- to long-term plan will play an important role in promoting high-quality development of the hydrogen industry in China.

Hydrogen generated from renewable energy resources, he said, is an inevitable choice on the path to green and low-carbon development, and development of the hydrogen industry will help China to achieve its ambitious carbon peak and neutrality goals.

Ouyang also warned of challenges and difficulties ahead, saying China needs to ramp up efforts to boost innovation and make breakthroughs in major fields, including hydrogen fuel cells and hydrogen storage systems.

More efforts should also be made to build a hydrogen innovation platform, carry out research on core technologies, cultivate more talent and promote international cooperation and exchanges.

Lin Boqiang, head of the China Institute for Studies in Energy Policy at Xiamen University, said the hydrogen industry is nascent, and a clearer road map in the plan will boost the industry.

Green hydrogen, he said, is zero-carbon fuel generated from renewable energy sources like photovoltaic power and wind power, which will reduce carbon emissions during the process compared with hydrogen generated from fossil fuels such as natural gas.

Agreed Wu Qi, executive director of the Wuxi Institute of Digital Economy, who highlighted the importance of developing the hydrogen industry to ensure energy security and achieve the climate change goals.

With the rapid development of technologies like the production, storage, transportation and application of hydrogen, the emerging industry will gradually grab a large share of China's final energy consumption, Wu said.