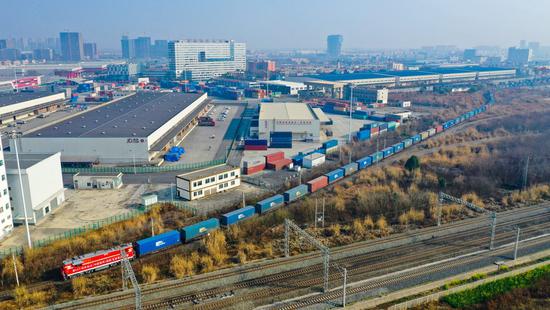 China and Russia have maintained stellar trade and economic cooperation, with both countries continuing to strive for greater synergy in various areas.

Bucking a global downturn, trade between China and Russia rose 35.9 percent year on year to 146.87 billion U.S. dollars in 2021, reaching the highest level in history, data from the Ministry of Commerce (MOC) shows.

In breakdown, China's exports to Russia increased by 33.8 percent year on year, while imports from Russia grew 37.5 percent.

Liu Huaqin, with the Chinese Academy of International Trade and Economic Cooperation under the MOC, said that products traded between China and Russia have been increasingly diversified and complementary.

Data shows that China's beef imports from Russia skyrocketed 235.7 percent to 17,000 tonnes in the January-November period of 2021, while imports of barley increased by 37.9 times.

Gao noted that Sino-Russia bilateral cooperation in energy and mineral resources, agricultural and forestry development, business and logistics, as well as industrial manufacturing has made solid progress.

China and Russia saw their cross-border e-commerce trade surge by 187 percent in the first 11 months of 2021, according to the MOC.

"With the joint efforts of the two countries, China-Russia economic and trade cooperation will enjoy steady growth, and continue to upgrade," said Liu.