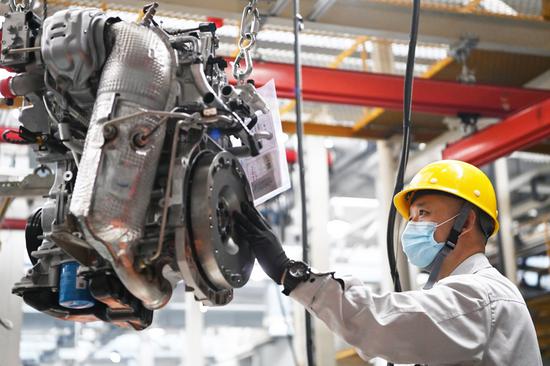 The Chinese economy has maintained sound recovery as policies coordinating COVID-19 control and economic development have paid off, and short-term headwinds have begun to wane, official data showed on Monday.

The country's major economic indices improved in October, with industrial production and retail sales reporting faster year-on-year growth than in September, according to the National Bureau of Statistics (NBS).

"Major October indicators have been generally kept in a reasonable range, while efforts to adjust structures and ensure people's livelihoods have proved to be strong and effective," said NBS spokesperson Fu Linghui.

He said that positive signs are emerging in industrial production, as factors constraining the sector in the third quarter such as floods and the COVID-19 epidemic have eased since October.

The job market has also been stable. China's surveyed urban unemployment rate stood at 4.9 percent in October, 0.4 percentage points lower than in the same period last year, according to the NBS.

During the first 10 months of this year, the country created 11.33 million new jobs in its urban areas, achieving its whole-year target in advance.

Fu said the trend of sustained recovery has remained unchanged while positive factors are accumulating, but cautioned that there are still international uncertainties, restraints on domestic recovery and rising pressures on corporate costs.

Fu said there seemed to be some signs of stagflation due to the pandemic, natural disasters, international commodity price hikes and tightening supplies of raw materials, and that they have been caused by short-term factors and the situation will be temporary.

Efforts to ensure supplies and stabilize prices are increasing, and tight supplies of certain energy products are easing, he said, expecting consumer inflation to remain mild.

Power generation was 639.3 billion kilowatt-hours in October, up 3 percent year on year, according to the NBS.

Responding to concerns over the recent sporadic resurgences of COVID-19, Fu said that with the extensive experience gained from past COVID-19 control work, China has relatively good conditions and fundamentals to contain the pandemic and will gradually reduce its impact on the economy.

"Despite certain risks and challenges, China's economic operations are overall stable, and the improving trend in development quality is likely to be sustained," said Fu, looking to the next stage.