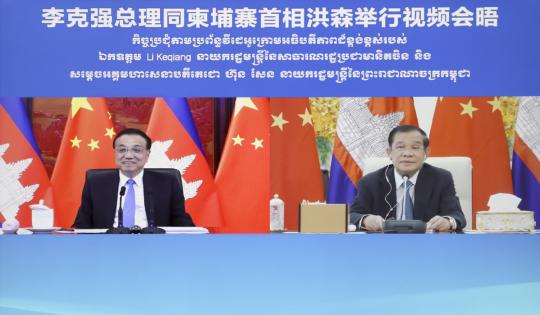 During a meeting via video link with Cambodian Prime Minister Hun Sen, Li urged greater alignment in development strategies between the two nations and joint efforts to move forward with regional economic integration, as well as trade and investment liberalization and facilitation.

Li highlighted the importance of taking advantage of opportunities from the Regional Comprehensive Economic Partnership and the bilateral free trade agreement to further lift bilateral cooperation.

The two nations signed a landmark free trade agreement－Cambodia's first such bilateral deal－in October 2020 that envisages broader bilateral economic and trade cooperation in a host of sectors. The deal will eliminate tariffs on 97.53 percent of Cambodia's exports to China, and on 90 percent of China's shipments to the kingdom.

In the first half of this year, trade volume between the two sides reached $6.11 billion, up 44 percent year-on-year, according to the Ministry of Commerce.

Li said that China will, as always, support Cambodia in following a path that suits its national conditions and do its best to help the nation in fighting COVID-19, promoting economic recovery and improving people's well-being.

He expressed China's support for Cambodia in hosting the Asia-Europe Meeting in order to further promote pragmatic cooperation.

China will firmly support the Association of Southeast Asian Nations in playing a central role in the regional framework, the premier said, adding that China supports ASEAN playing a greater role in regional and international affairs.

Hun Sen hailed China as an "ironclad friend", saying that the two sides have always stood in solidarity during difficult times.

Cambodia appreciates China's support for its social and economic development, he said, adding that the ASEAN member's pandemic fight has secured a major outcome with support from Beijing.

He expressed his hope that the two sides can enhance cooperation in agriculture, infrastructure, public health, education and culture.

It is important to ensure that the bilateral free trade agreement can come into effect as scheduled next year－a key step to take bilateral trade to a higher level, he said.

Cambodia is willing to step up coordination with China to ensure the Asia-Europe Meeting can reach positive outcomes and to further enhance China-ASEAN relations, he said.