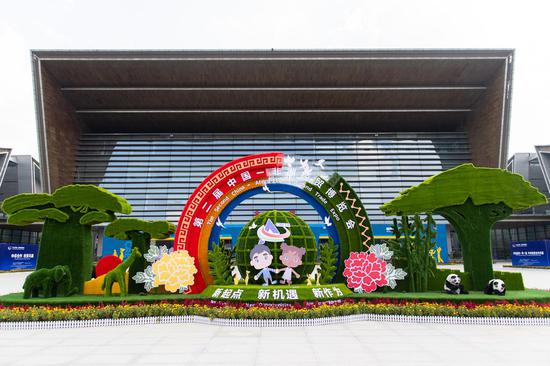 The four-day event, held both online and offline, and themed "New Start, New Opportunities, and New Accomplishments," has attracted nearly 900 enterprises from about 40 African countries and China, according to the organizers.

The expo in Changsha, capital of central China's Hunan Province, features exhibitions on the fruits of China-Africa economic cooperation, African brand commodities and specialty products such as coffee and nuts. The event also includes forums on cooperation in areas such as food and agricultural products, the healthcare industry, financing, infrastructure and the private sector.

The expo has a total exhibition area of 94,000 square meters this year, with Algeria, Ethiopia, Kenya, Rwanda, South Africa and Senegal the guest countries of honor.

"China-Africa economic and trade cooperation is at a critical period of transformation, upgrading, and improving quality and efficiency," said Wang Bingnan, China's vice minister of commerce, at the opening ceremony.

Organizing a successful China-Africa Economic and Trade Expo and building a high-level pilot zone for economic and trade in-depth cooperation will effectively promote China-Africa market connectivity and the sharing of factors and resources, while contributing to stabilizing and facilitating industrial and supply chains and the building of a new development pattern, Wang added.

First launched in 2019, the expo is a major platform for strengthening economic and trade cooperation between China and African countries. Among the new measures to promote two-way trade, the expo this year included new special events to promote African products such as coffee.

In Africa, a key region of SANY's international development, the company will focus on major engineering projects and infrastructure construction to provide cost-effective products and more efficient and perfect services, said Liang Wengen, chairman of China's machinery giant SANY Group. The Changsha-based company first exported its products to Africa in 2002 and has long been a leader among Chinese exporters of machinery to the continent.

By the end of 2020, China had been Africa's largest trading partner for 12 consecutive years. Bilateral trade registered robust growth this year, with trade volume rising 40.5 percent year on year to 139.1 billion dollars in the first seven months. It is a record high, year on year, according to China's Ministry of Commerce.

With the support of the China-Africa Economic and Trade Expo, small and medium-sized African enterprises have established partnerships with Chinese companies and entered the Chinese market, Senegalese President Macky Sall said via video at the expo's opening ceremony.

Noting that China and Africa together constitute a market of more than 2.5 billion consumers, Sall said the two sides should reinforce complementary advantages in the agriculture and industry sectors to optimize industrial transfer, as well as economic and trade cooperation.