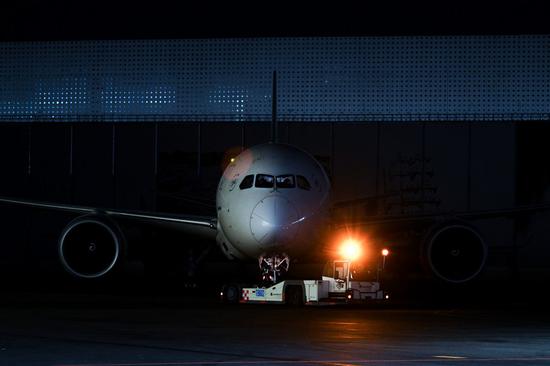 An aircraft with medical supplies from China arrives at an international airport in Mexico City, Mexico, on May 12, 2020. (Xinhua/Xin Yuewei)

An airlift program carrying medical supplies from China to Mexico was extended this week after completing the first planned flights as the North American country is grappling with surging COVID-19 cases.

A plane, which arrived Thursday night in Mexico City from Shanghai, has become the 21st flight completed since April 7.

The air bridge has been made possible due to an agreement between the two countries to cooperate in fighting the pandemic.

"(It is) an important act of symbolism with a new milestone of cooperation during the difficult times we are living in," said Mexican Deputy Foreign Minister for Multilateral Affairs Martha Delgado, who received the supplies at the airport.

Initially, 20 flights were planned for the transportation of supplies and medical equipment, but Mexico announced that the mission would be expanded after the original project was completed on June 19.

The first 20 flights carried tons of materials that Mexico had acquired from Chinese companies, while the second cycle began with a delivery of donations from China to the Mexican people.

Chinese companies like China Meheco delivered supplies for Mexican health personnel battling the COVID-19 pandemic at a time when medical supplies were in high global demand.

"As an international company dedicated to the health sector, China Meheco maintains with conviction the concept of appreciating life, caring for health, and it is our mission and responsibility to make contributions in the fight against this pandemic worldwide," Zhang Shichun, the company's representative in Mexico, Central America and the Caribbean, has said.

According to the Mexican government, four flights during the first cycle transported ventilators for intensive care units, one of the most difficult products to obtain under the current circumstance. Other flights carried supplies such as masks, gloves and glasses.

The Chinese ambassador to Mexico, Zhu Qingqiao, said during the delivery of supplies that the Chinese government stand firm with the Mexican side in the fight against the pandemic.

COVID-19 knows no borders, and all countries are part of the community with a shared future, which requires unity and cooperation in both facing the pandemic and supporting economic recovery, Zhu added.

The Mexican deputy foreign minister said in an interview with Xinhua that Mexico has found China a very supportive friend, which has facilitated the delivery of supplies when production chains have broken down in the country and the global market has collapsed due to high demand.

"For us, it was crucial because we had the opportunity to have personal protective equipment and medical equipment that was indispensable ... While the rest of the world attended to their own domestic problems, immediate support from China was very important," she added.