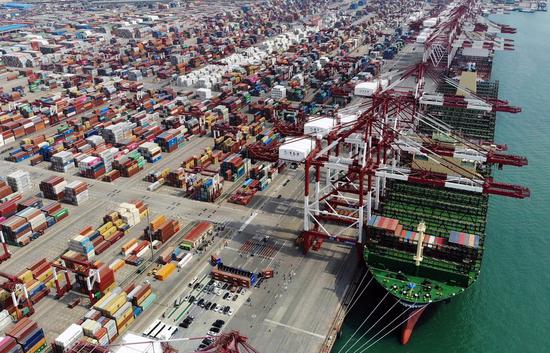 The volume of global merchandise trade would shrink by around 18.5 percent year-on-year in the second quarter of this year, the World Trade Organization (WTO) said Tuesday.

"The fall in trade we are now seeing is historically large -- in fact, it would be the steepest on record. But there is an important silver lining here: it could have been much worse," said WTO Director-General Roberto Azevedo in a press release.

In its earlier report, the WTO forecast that global trade would fall by between 13 percent and 32 percent in 2020 largely due to the COVID-19 pandemic.

"As things currently stand, trade would only need to grow by 2.5 percent per quarter for the remainder of the year to meet the optimistic projection," the WTO said in its updated global trade statistics and outlook, mentioning that rapid government responses helped temper the contraction.

However, looking ahead to 2021, the WTO predicted that adverse factors, such as a second wave of infections, weaker-than-expected economic growth, and recourse to trade restrictions, could see trade expansion fall short of earlier projections.