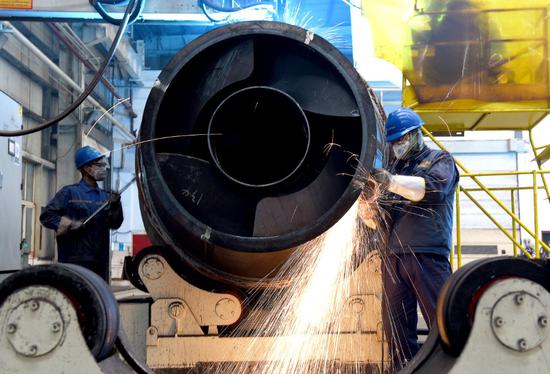 The quality of China's economic growth further improved last year, as the industrial structure continued to upgrade with high-technology manufacturing industries being a strong driver, the nation's top industry regulator said on Monday.

According to Miao, the high-tech sector is playing a bigger role, as witnessed by the fact that the segment registered a year-on-year growth rate of 8.8 percent and outpaced the overall industrial output growth in the period.

Last year, sales of vehicles were down by 8.2 percent year-on-year with new energy cars also experiencing a drop. The Ministry of Industry and Information Technology said on Monday it expected that the market will start to stabilize and recover this year.

In response to questions on whether China will cut subsidies for new energy vehicles in June and whether it will completely stop offering such subsidies by the end of 2020, Miao said the issue is still under discussion and the ministry "is likely to postpone the timeline".

"To build the 'mansion' of manufacturing next year, China will first ratchet up efforts in the research and development of core technologies. A group of State-level innovation centers on manufacturing will be built next year," said Miao.

He added that accelerated steps will also be made to transform traditional industries to boost the "resilience" of the construction.

To maintain stable growth of the manufacturing industry, the first and foremost approach is to leverage advanced technologies to transform traditional industries, which accounted for 80 percent of the total sector, Wang said.

"Emerging industries, on the other hand, will decide China's position and competitiveness on the global stage. Sectors including 5G, artificial intelligence and the internet of vehicles will not only pull up manufacturing but will also stimulate investments in new infrastructure," he said.

China kicked off the commercialization of 5G in late October. GSMA, a global association of mobile operators, predicted the number of 5G users in China will reach 400 million by 2025, accounting for about one-third of the world's total.

By the end of last year, a total of 130,000 5G base stations have been built and more than 13.8 million smartphones have been shipped, the Ministry of Industry and Information Technology said on Monday. US investment bank Goldman Sachs painted an even more optimistic picture, predicting that China would build about 1 million new 5G base stations this year, up from its original prediction of 600,000.

Another report by the China Academy of Information and Communications Technology said that the superfast 5G is expected to directly bring 10.6 trillion yuan ($1.5 trillion) in economic output between 2020 to 2025, and 8 million jobs by 2030.

In terms of 6G, Wen Ku, head of information and communication at the Ministry of Industry and Information Technology, pointed out on Monday that China will maintain a steady pace in developing the next-generation technology.

"We started related work of 6G in 2017, but it is still in its infancy since we are still in the process of developing the 5G technology, including in terms of independent networking and applications," Wen said.

Miao added that China has enlarged the IMT-2020 (5G) Promotion Group to IMT-2030 to join global efforts in promoting standards on such technologies. "Whether for 5G or 6G, China will never close the door on making globally unified standards."