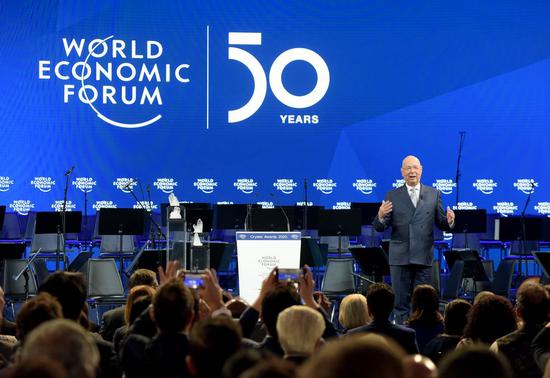 Klaus Schwab, founder and executive chairman of the World Economic Forum (WEF), speaks at the Celebration of the 50th Anniversary of WEF in Davos, Switzerland, Jan. 20, 2020.(Xinhua/Guo Chen)

The World Economic Forum (WEF) annual meeting opened in Davos Tuesday with a focus on renewing the concept of stakeholder capitalism to overcome income inequality, societal division and the climate crisis.

Themed "Stakeholders for a Cohesive and Sustainable World," the meeting convened around 3,000 participants from over 100 countries and regions.

The four-day event with nearly 400 different sessions will focus on six core areas of activities, namely ecology, economy, society, industry, technology and geopolitics, through which stakeholders can advance the mission of creating a more cohesive and sustainable world.

"The world is in a state of emergency and the window to act is closing," Klaus Schwab, founder and executive chairman of the WEF, said in his welcoming remarks. He called for actions to restore the trust and confidence of people worldwide.

"We do not want to leave behind to the next generations an ever more hostile and ever less habitable world," said Schwab.

This year marks the 50th anniversary of the WEF, which was established as a non-profit foundation and is headquartered in Geneva, Switzerland. The forum engages political, business, cultural and other leaders of society to shape global, regional and industry agendas.