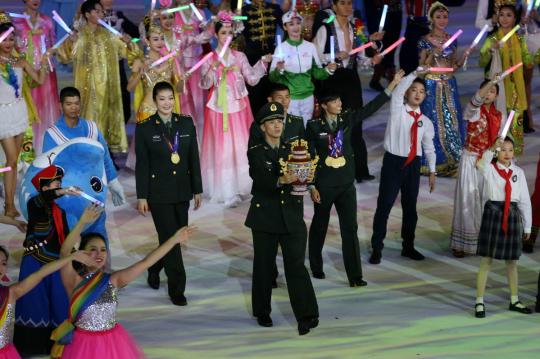 Xi Jinping, chairman of the Central Military Commission, signed an order of commendation on Monday to honor the Chinese athletes and coaches who participated in the 7th Military World Games that concluded in Wuhan, Hubei Province, on Sunday.

The document said all athletes and coaches fought hard, challenged their limits, conveyed messages of friendship and peace and earned honor for the country and the people at the games.

"Your tenacious and outstanding performances have demonstrated that our military sports team is a strong team that listens to commands and fights to win," it said, adding that Chinese athletes also showcased the new image of the military after reform, greatly stimulated patriotism, inspired morale and strengthened confidence in achieving great rejuvenation for the nation.

The Chinese military sent a delegation of 553 members, including 406 athletes, to the games, which attracted 9,308 athletes from 109 countries.

China topped the medal table with 239 medals, including 133 golds and 64 silvers, and broke a number of the games' records and world records.

The order said that the Chinese delegation's performance was a historic breakthrough at the Military World Games, and they have made outstanding contributions to achieving the goal of "first-class organization and first-class performance" thanks to their pursuit of excellence.

It said that at the competitions, the athletes and coaches showed no fear of strong competition, defended the values of honor and peace and respected rules and opponents, adding that they inherited the fighting spirit of the army, appeared strong and civilized and set a good example for soldiers in the new era.

The order also called for all athletes and coaches to make persistent efforts to create greater glory, adding that the entire military should learn from them to hone their fighting spirit and combat skills.