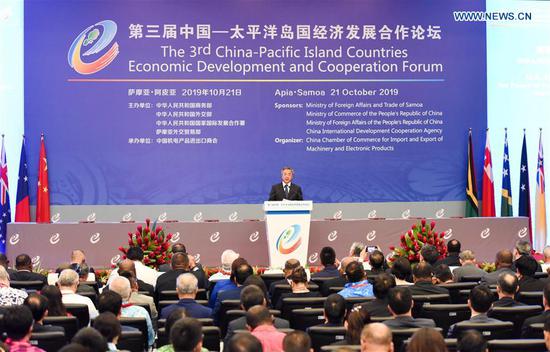 The third China-Pacific Island Countries Economic Development and Cooperation Forum was launched Monday in Apia, the capital city of Samoa.

Hu said Xi and leaders of Pacific island countries with which China has diplomatic relations met in Papua New Guinea in November last year and announced the decision to elevate their relations to a comprehensive strategic partnership of mutual respect and common development, ushering in a new stage of relations between the two sides.

Xi's congratulatory message pointed out the direction for the development of the forum. China is willing to cooperate with all parties concerned to implement the consensus reached by the leaders, deepen strategic coordination, push forward cooperation on jointly building the Belt and Road Initiative (BRI) and share development experiences, to get the island countries better empowered in achieving sustainable development.

China expects to expand trade and investments with the Pacific island countries and grow cooperation in sectors like agriculture, forestry and fishery, energy and resources as well as tourism. Furthermore, there's plenty of opportunity in bolstering people-to-people exchanges and building mutual understanding in order to further enrich the comprehensive strategic partnerships, Hu said.

During his stay in Samoa, Hu met respectively with leaders or delegation chiefs of Pacific island countries with which China has diplomatic relations, as well as leaders of related regional organizations. He also visited a China-funded aid project.