China will take necessary countermeasures if the Office of the United States Trade Representative imposes 10-percent tariffs on the remaining 300 billion U.S. dollars' worth of Chinese goods, warned a senior official of the Customs Tariff Commission of the State Council in a statement on Thursday.

The move by the U.S. side seriously contravened the consensus reached between the two leaders of China and the U.S. during their meetings in Argentina and Osaka, added the official.

China's Vice Premier Liu He conducted a phone call with U.S. trade representatives on Tuesday night Beijing time, and are scheduled to host another phone call within two weeks, according to statement released by China's Ministry of Commerce (MOFCOM).

U.S. President Donald Trump said on August 1 that he will impose additional 10-percent tariffs on the remaining 300 billion U.S. dollars' worth of Chinese imports starting from September 1.

The new tariff slapping came the day after both sides met in Shanghai for the 12th round of economic and trade consultations on July 30 and 31. After those meetings, China and the U.S. said that both parties conducted candid, efficient and constructive exchanges on major issues like China's increasing purchase of U.S. agricultural products and the U.S. creating favorable conditions.

Responding to the U.S. new tariff decision, MOFCOM said one day after Trump's additional tariffs announcement that it was a serious violation of the consensus reached between the heads of state of the two countries in Osaka and is not conducive to solving the problem.

China always believes that there is no winner in a trade war, MOFCOM claims, and it doesn't want a trade war, but is not afraid of one either. (Updated) 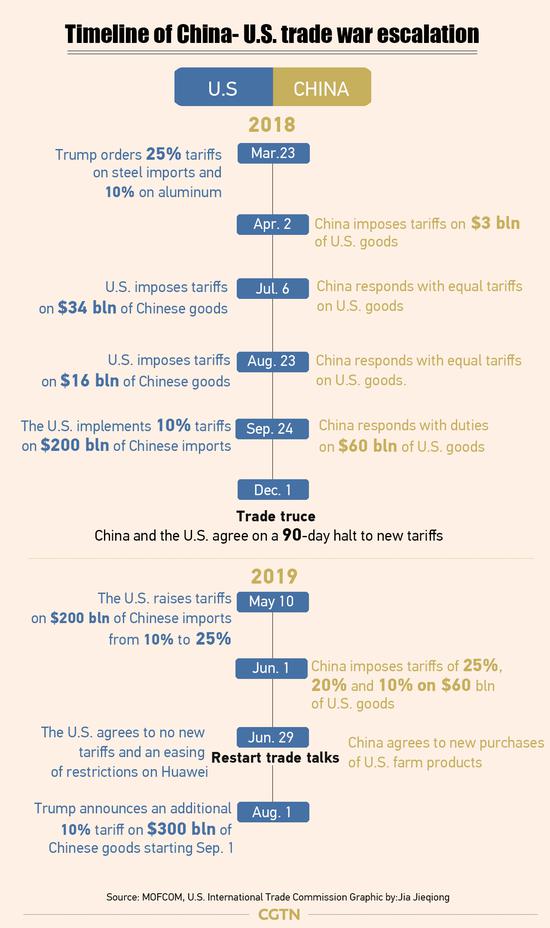