Chinese tourists made 149 million overseas trips in 2018, spending a total of 130 billion U.S. dollars, according to a report released by the China Tourism Academy.

Both registered significant annual increases – 14.7 percent for trips and 13 percent for money spent. 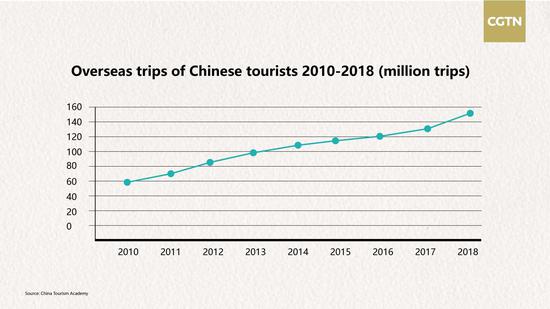 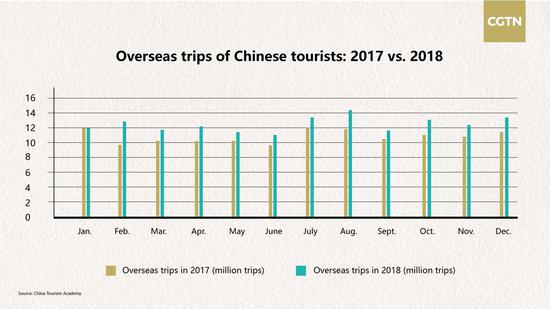 Asia became the most popular destination for Chinese in 2018, accounting for with 89.03 percent of trips, followed by Europe, with 3.83 percent, the report said.

The three leading destinations were Hong Kong, Macao and Thailand with Japan, Vietnam, South Korea, the U.S., Taiwan, Singapore and Malaysia rounding out the top ten.

According to the report, overseas trips are becoming more convenient more than ever, facilitated by easier visa processing. In addition, more and more airlines, flights as well as railways have continuously optimized cross-border transportation. Chinese logos, mobile payments and services especially for Chinese people all contribute to a booming market.

The report also found that with the ever-growing demands of tourism quality, Chinese people are more inclined to do package tours. 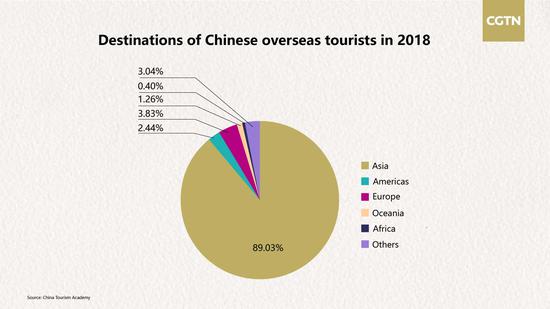 According to the United Nations World Tourism Organization, the number of global travelers will exceed 1.8 billion by 2030. China is considered the world's fastest growing tourism market and will play a key role in the sector's development.

The domestic tourism market is also booming. In the first half of the year, China's domestic tourism revenue came in at 2.78 trillion yuan (about 402 billion U.S. dollars), up 13.5 percent year on year, according to the report.