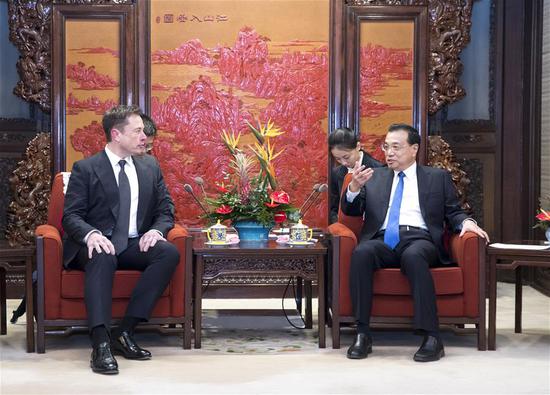 U.S. electric carmaker Tesla Inc. on Monday broke new ground with its Shanghai factory, becoming the first to benefit from a new policy allowing foreign carmakers to set up wholly-owned subsidiaries in China.

China hopes Tesla will become a participant in China's deepening opening up and a driver for the stable development of Sino-U.S. ties, Li said.

Li said that China will continue to be a hot destination for foreign investment.

He had an in-depth exchange of views with Musk on topics such as the development of the new energy automobile industry and the collaborative innovation cooperation covering science, technology and cultural areas.

Musk said China's development speed and efficiency are impressive, and it is hard to imagine that the process of opening a car factory could be done in such a short period of time.

Tesla will strive to build the Shanghai factory into one of the most advanced factories in the world, and will localize the products according to the needs of the Chinese market to better achieve mutual benefit and win-win results, according to Musk.