Shoppers from China spending less on luxury products in the U.S. 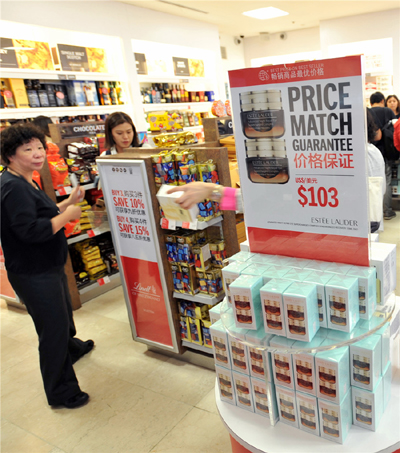 Chinese shoppers have spent less on luxury goods in the United States this year because many stayed at home, according to analysts.

Staying at home may be a trend, say the analysts, and it concerns global luxury brands like Louis Vuitton, Burberry, Gucci, Ermenegildo Zegna, Christian Dior and Tiffany & Co because they are used to Chinese customers spending lavishly on their goods outside of China－some $90 billion last year.

In November, Tiffany & Co, the upscale U.S. jeweler and specialty retailer, said the company's comparable sales rose just 2 percent in the most recent quarter, and it blamed sluggish spending by Chinese tourists at key U.S. stores, including its New York flagship.

Tiffany executives said that the majority of its Chinese customers－about two-thirds－make their purchases abroad.

The increase in the sale of luxury goods in China was also noted in a report in November by Bain & Co consultancy. Purchases of luxury goods by Chinese made up 33 percent of the world's total luxury goods sales in 2018, up from 32 percent in 2017.

But between 2015 and 2018, purchases on the Chinese mainland accounted for twice as much growth as spending abroad, and the share of luxury goods bought in China in 2018 rose to 9 percent from 8 percent in 2017.

Global luxury stocks were down by 11 percent in October, a reduction of $150 billion in market value－the worst result in a decade, Bloomberg reported. This came amid traders' concerns that Chinese shoppers have grown tired of spending on luxury items overseas, Bloomberg said.

The number of Chinese tourists who visited the U.S. in July, August and September was 880,000, a drop of 20 percent from 2017, according to the China Outbound Tourism Research Institute in Germany.

At least 3 million Chinese visit the U.S. each year, and spent $30 billion in 2016 on retail, accommodation and travel, according to figures from the U.S. National Travel and Tourism office.

"When choosing where to shop, consumers want to go where they are welcome and where it is easy. As it becomes more difficult to enter the U.S., they will just choose other locations."

David Becker, CEO of Attract China, a New York-based travel consultancy, said: "Japan was the most popular destination for independent (non-tour group) tourists, with 14.1 percent of outbound tourists visiting cities such as Tokyo and Osaka."

Becker added: "There are anecdotal stories that Chinese business groups planning meetings and conventions in the U.S. (this year) have had a higher visa-refusal rate."

Cavender also cited the U.S.-China trade dispute as affecting the number of visits and spending by Chinese tourists, and "we are starting to see enrollment from Chinese nationals to U.S. universities beginning to fall.

"Because it is increasingly difficult to get study visas, Chinese students are instead choosing other markets like the UK or Australia for their studies," he said. "This has a big impact, because a lot of the visits by Chinese luxury buyers to the U.S. were parents or family visiting students and then shopping, or the students themselves making the purchases."

A weakened yuan also has made some more cautious with their cash as buying luxury clothes, handbags and jewelry in the U.S. could cost more than on the Chinese mainland.

Many high-end goods companies like Chanel, Prada and Gucci have brick-and-mortar stores in China, allowing shoppers to get a bargain at times without flying to the U.S. and Europe.

Becker said that Chinese travelers also have changed how they travel overseas, with more choosing solo visits over a group tour.

"The transition from group travel to independent (non-group) travel means fewer tour buses, and reaching Chinese requires more effort on the part of retailers," he said.

"Whereas in the past, shopping was the number one reason for travel, Ctrip reports that just 12 percent of travelers designated shopping as their main motivation for going overseas. What Chinese are looking for more and more are unique experiences at their destination."

Armando Branchini, vice-president of Italian luxury trade association Fondazione Altagamma, said that he is preparing for "uncertainties", among Chinese shoppers in 2019.

But the Chinese are predicted to account for half of the world's luxury goods sales by 2025, according to Bain. They will spend $412 billion on luxury items, or 46 percent of global sales, in the next six years alone, Bain said.

"With greater availability within China of international goods, a lowering on import taxes on luxury goods and an easy, dependable way to buy goods through trusted cross-border e-commerce companies like Border X Labs, Chinese do not have to dedicate as much time to making purchases at their destination (abroad)," Becker said.