Visitors at panda base review its path from nursing to 'sexercise' 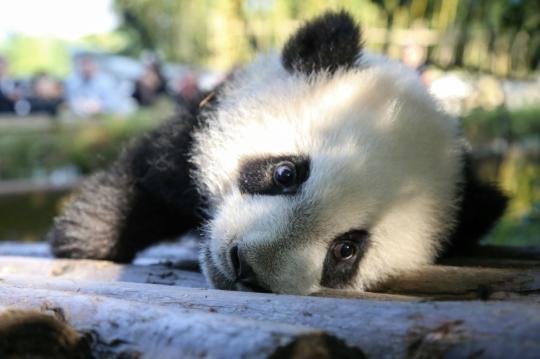 A newborn panda cub from the Chengdu Research Base of Giant Panda Breeding in Sichuan province. （Photo by Chen Cheng for chinadaily.com.cn）

Xiao Li has visited the Chengdu Research Base of Giant Panda Breeding in Sichuan province nine times this year, showing around relatives and friends who have come from outside the province.

"They say they must see pandas in Chengdu, and they have a good time watching the bears in trees or eating bamboo in enclosures," she said.

In the 1980s, many bamboo plants in the region blossomed and died, which led to a food shortage for pandas in Sichuan. Many wild pandas went hungry. And some fell ill.

To provide a sanctuary, the base was set up in 1987 with six hungry and sick pandas that had been rescued from the wild.

Now there are 548 captive pandas worldwide, and the base is home to nearly 200 of them.

In the beginning the base had only six pandas. Most visitors in the early years were foreigners. But now most are Chinese with an increased awareness of protecting endangered animals, base chief Zhang Zhihe said.

Some visitors wonder how the panda population could have risen so rapidly at the base in little more than three decades. Zhang said it's because the government has attached more importance to panda conservation and researchers have learned how to get pandas to breed, Zhang said.

Pandas are famous for difficulty in breeding, and researchers at the base have tried to help them. They rely on special odors to remind pandas of sex in the spring, placing a male and female in the same dens.

In the wild, pandas live alone, and males and females only get together in spring to mate.

More than 30 percent of pandas at the base can have sex naturally, compared with only 10 percent in earlier days, said Fei Lisong, a senior researcher and former deputy chief of the base.

To better prepare male pandas for sex, researchers have introduced a rigorous "sexercise" program, luring them with apples to make them walk on two legs, which strengthens their hip muscles. The dance-like routine also boosts the animal's sexual stamina, Fei said.