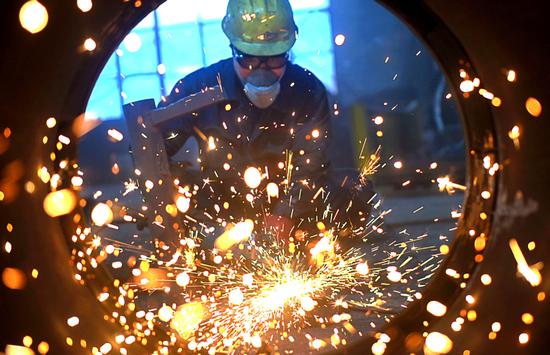 The country's gross domestic product growth will ease to 6.3 percent in 2019 from this year's 6.6 percent, and China will set its next year annual growth target between 6 percent to 6.5 percent said Zhang Jun, economist with Morgan Stanley Huaxin Securities.

China will keep economic growth at a reasonable level, a meeting held by the Political Bureau of the CPC Central Committee said on Dec 13.

Utilizing the reasonable level to manage economic growth will be conducive to promote reforms to substantial level and avoid short-term economic fluctuation to disturb the reforms, said Yang Chang, analyst at Zhongtai Securities.

This year, the sustained pullback on the manufacturing PMI and profits of industrial enterprises will surpass industrial activity; the adverse effects from trade tension between China-US will incarnate next year; although the tax reduction policy will support the consumption, the long-term home loan will restrict the consumption to expand, Su said.

Next year, the contribution of investment to GDP will remain flat from 2018 due to the upswing in infrastructure investment growth, manufacturing investment will maintain a high growth, and the growth of the real estate investment will slip a bit, Su added.

The growth of retail sales will decline to around 8.9 percent next year; in order to maintain the consumption, the government needs to announce more policies to loosen consumption, Zhang said.

In the long-term, the government needs to invest more on social public products such as education, healthcare and elderly, aims to lower Chinese people's defensive deposit to solve people's worries to consumption, Zhang added.

Su Jian said China's retail sales will increase 7.8 percent year-on-year on 2019 as the marginal utility of consumption will trickle down, as well as the influence of social security and the individual income tax reform have not yet been felt.

In 2019, the fixed-asset investment growth will be difficult to realize a big jump under the background of overcapacity reducing and restructuring; the enterprises' investment will be effected by enterprise short-term cost fluctuation from the social security and the individual income tax reform; Some uncertainties such as environment policies and social security reform will also add pressure to enterprises' investment, Su added.

The growth of export and import will decline from 11.3 percent and 18.5 percent to 5.2 percent and 6.3 percent in 2019, as well as the trade surplus will narrow to $350 billion, the contribution of net export to GDP growth will be at -0.8 percent, Zhang Jun predicted.

Due to the trade surplus narrowing, and the global liquidity tightening led to FDI, or foreign direct investment declining, the funds outstanding for foreign exchange will shrink next year, Zhang said.

Su Jian said the growth of export and import will be at 14.4 percent and 6.2 percent in 2019, as Chinese people's consumption structure is improving and upgrading, and the expanding import policy is carrying out, the growth of import will increase in 2019.

Shen Jianguang, chief economist JD Finance, said China's annual economic growth target in 2019 is essential to come down to around 6 percent growth as that's better for bottom-line thinking and will give more space to China for reforming.