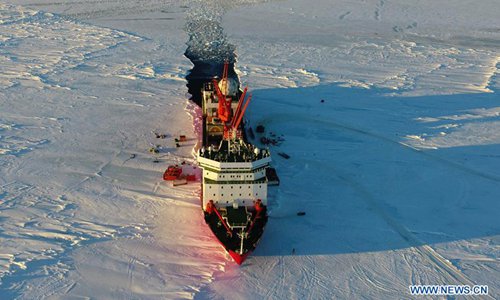 China recently discovered a huge blue ice area in the Antarctic suitable for the country's first large permanent airport on the continent, where China's strategic transport aircraft Y-20 can operate.

The discovery was made by China's 35th Antarctic research expedition team about 10 kilometers away from their base, the Xinhua News Agency reported on Sunday.

The team used drills to test the thickness of the ice, the report said.

The team will further inspect the blue ice area before deciding on a construction plan, Xinhua reported.

There are eight blue ice airports from different countries in the Antarctic, Sun said.

China's large transport aircraft Y-20 and Airbus' and Boeing's long-range commercial planes can all take off and land on a blue ice runway without modifying their landing gears, Sun said.

Another form of airstrip, the skiway, in the Antarctic based on snow rather than ice needs constant maintenance, and an aircraft must be equipped with a sled landing gear to take off and land, Xinhua reported. Larger aircraft cannot use a skiway at all, it said.

Dong Yue, a research fellow at the polar research institute of the Ocean University of China, told the Global Times that it was difficult for China to transport personnel and goods like food and equipment to the Antarctic, or take out samples from there. "Using a large aircraft will be more efficient."

China now operates four research stations in the Antarctic, with a fifth under construction. However, no permanent airfield is available to China, Xinhua reported.

Having an airport represents a country's high research capability and influence in the Antarctic, Dong said.

Other countries can also use China's future airport for a reasonable fee, as China will not only provide services to the international community but will also enhance its presence and management in the region, Dong said.

During China's 32th Antarctic research expedition from 2015 to 2016, China's polar fixed-wing aircraft Xueying 601made its first successful flight to the Antarctic, Xinhua reported.