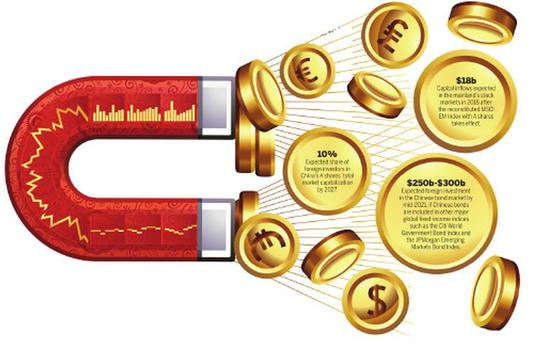 Stocks, bonds set to sizzle following inclusion in a global index and easing of controls on two-way capital flows

For China's capital markets, a massive, potentially irreversible game-changer is on the horizon.

The imminent change is expected to open the floodgates for unprecedented levels of foreign investment.

"China is now too important a market to ignore because investors can find the kind of growth opportunities here that are rarely available in other parts of the world," said Jeff Li, a London-based global equity fund manager at EFG Asset Management.

The scenario Li foresees is a far cry from the recent past.

For long, global investors' abysmally low exposure to China's capital markets has been disproportionate to the country's 16 percent share of the world gross domestic product ($87.5 trillion in 2017, as per IMF data) and the 106 trillion yuan ($16.5 trillion) valuation of its equity and bond markets.

For years, foreign ownership of China's A shares, or renminbi-denominated equities traded on the stock exchanges in the Chinese mainland, has been static around 2 percent or less.

This, despite the fact that China's stock market, whose capitalization is over $8.5 trillion, is the world's second-largest.

All these years, foreign participation was also minimal in the Chinese bond market, the world's third-largest valued at $8 trillion as of April.

Unlike economic sectors like manufacturing where foreign investment is pronounced, China's capital markets have been funded almost entirely by domestic money.

That, however, is set to change. And the change will likely be big and rapid.

Chinese stocks and bonds are poised to be included in major global indices. And the Chinese regulators intend to further open up the markets by loosening controls on two-way capital flows.

After three failed attempts, the A shares will be finally included in the MSCI Emerging Markets Index on Friday. The index, tracked by more than $1.9 trillion assets at the end of 2017, is one of the benchmark indices followed by global fund managers who wish to have an exposure to equities of emerging markets.

Initially, 234 large-cap A-share stocks will be added to the MSCI EM Index. The inclusion will be further expanded in August, making China's A shares account for about 0.81 percent of the overall index.

Even with the small initial representation, the A shares' inclusion is a milestone event that heralds further integration of China into global financial markets, said Alain Bokobza, head of global asset allocation and equity strategy at French bank Societe Generale.

If observers think there is nothing in the MSCI move to be excited about given the A shares' initial small weighting, they could be missing the real point, he said. While the index's revamp itself may turn out to be "a storm in a teacup", Chinese shares' tradability and liquidity are growing fast. This offers a chance for money managers to get bigger exposure to the Chinese economy, Bokobza said.

The inclusion is expected to immediately trigger an inflow of about $18 billion into the Chinese mainland equity market. Some estimated the inflows will likely increase sharply over the next five to 10 years.

In the run-up to the Friday event, as if in anticipation of the capital deluge, overseas asset managers had been rolling up their sleeves to build positions in the A-share market.

As at the end of March, they held A shares worth about 1.2 trillion yuan, or 3.6 times the value of their holding as of March 2014, according to data from the Chinese central bank. The proportion of foreign ownership in the mainland stock market has risen to 2.5 percent from 1.6 percent in March 2014.