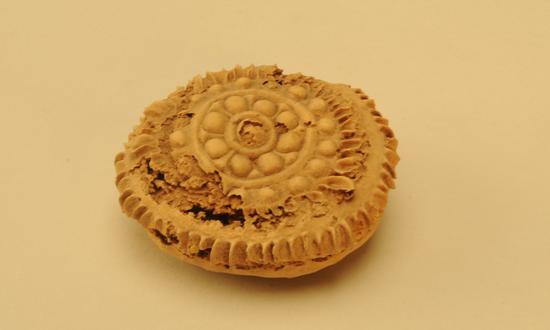 A 1,000-year-old cake collected by the Xinjiang Museum (Photo/Courtesy of Sun Weiguo)

Amongst the many historical treasures on display at the Xinjiang Museum in Northwest China's Xinjiang Uygur Autonomous Region, a one-of-a-kind 1,000-year-old cake is small yet riveting.

Looking very similar to the traditional Chinese pastry known as "mooncake," the cake sports typical Tang Dynasty (618-907) decorations that you might find on pastries today, which hints at the continuity of Chinese culinary wisdom and the cultural communications between China's ancient Western Regions and the Central Plains since ancient times.

The preserved cake was discovered in the Astana Tombs cluster close to Turpan in Xingjiang 50 years ago. Able to fit in the palm of an adult, the cake was fairly well preserved due to the dry conditions in the region. However, why it is possible to study its likeness, just how this ancient baked good tastes may forever remain unknown as researcher Sun Weiguo, who spent years analyzing the culinary relic, told the Global Times that it is "unreplicable."

"Unlike many other relics from which we can take samples to reproduce it, this piece is extremely precious due to its 'edible' nature, collecting any sample could damage it," Sun said.

The one-and-only Tang cake is the most complete one ever found. Even though it has been around 1,400 years since it came out of the oven, the relics retains a light brown color and a texture akin to a chocolate biscuit. Most clear, is the incredibly intricate floral patterns molded on its surface.

Sun revealed to the Global Times that the color shows it was made using wheat flour, while the design came from an ancient mold used by the baker.

"Baoxiang refers to the solemn image of Buddha. The pattern shows Buddhist culture's influences on the development of the Sui [581-618] and Tang dynasties," Sun noted.

"It can also be seen on silk products and gold and silver wares from the time."

Sun noted that other historical items such as brocade shoes and a small wooden pot with creative baoxiang hua designs featuring lotus and peony flowers have also been discovered in the Astana Tombs cluster.

"It proves the artistry celebrated by the people of the Central Plains have also been popular among people of various ethnic groups in Xinjiang during the Tang Dynasty," Sun remarked.

The pattern is not the only example of the cultural convergence between Xinjiang and the Central Plains.

An expert on China's food history, Sun said that the cake's filling most likely contains ingredients such as dates, walnuts and raisins, some of which were brought into China by foreign cultures and also appear to be typical to the food traditions of Xinjiang.

Sun said that wrapping such goodies together in a crust made from the typical staple crop of the Central Plains shows Xinjiang's "multicultural" character and reveals Chinese civilization's "unity in diversity."

"The culture of Xinjiang has always been a window that shows the open-minded nature of Chinese civilization," Sun noted.

Wang Hui, a culinary cultural historian agreed with Sun, telling the Global Times that China-West cultural exchanges could also be seen during the Qin (221BC-206BC) and Han (206BC-AD220) dynasties, the introduction of red wine making techniques, for example. Such foreign traditions are no longer considered foreign because they have been well incorporated and have evolved new local adaptations in Chinese culture.

In addition to the cake, which recently became a hot topic viewed by more than 65 million social media users on China's Twitter-like platform Sina Weibo, other relics discovered in Xinjiang have intrigued netizens, getting them to wonder about their origins.

Sun told the Global Times that Xinjiang's "underground museum" - the Astana Tombs cluster - has also produced other interesting food discoveries that look like they were inspired by Central Plains dishes such as dumplings or mantou (steamed buns).

Relics expert Xu Shuming noted that the fragments are only one of the historical accounts alongside some other ancient registration texts and literature materials discovered in Xinjiang that show the Central Plains' cultural and social routines were woven in the everyday life of the ancient Western Regions.

The Five Star Rise in the East Brocade, a Han Dynasty arm protector, is also stored at the Xinjiang Museum. The relic is a highlight of Chinese archaeology history for featuring the characters zhongguo (Lit: Middle Kingdom), or "China."

"Such examples are like drops in the sea that prove Xinjiang culture has roots in Chinese civilization," Xu noted.