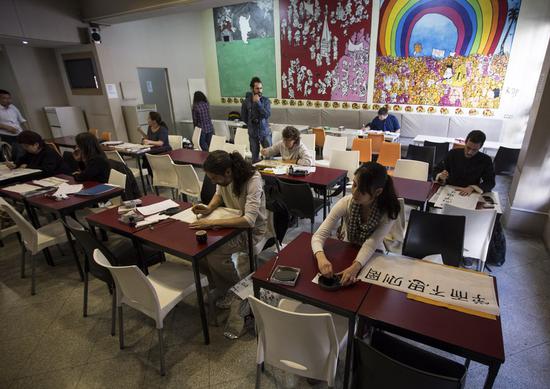 Argentina's third Confucius Institute officially opened its doors at the National University of Cordoba (UNC), offering introductory to advanced courses on Chinese language and culture at the country's oldest institute of higher education.

The Confucius Institute opened following a four-year joint effort by UNC leaders, China's Jinan University and the Chinese Embassy in Argentina, expanding a network that includes institutes at the University of Buenos Aires and at the National University of La Plata.

"A delegation from Jinan University visited the National University of Cordoba in April 2019 to discuss a work agreement that was completed in November," which laid the groundwork for the new institute, Elena del Carmen Perez, dean of the UNC School of Languages, told Xinhua.

Online classes began in mid-August, with courses taught by teachers from both China and Argentina, and an enrollment of some 150 students, mainly from the central province of Cordoba, and other parts of the country, Perez said.

Currently, the Confucius Institute at the UNC offers introductory and beginner courses in reading comprehension of Chinese in Spanish and in English, and a business Chinese workshop in English. It is also preparing the HSK (written test) and HSKK (oral test) exams to certify Chinese language proficiency.

"We put together this battery of courses, teachers from China and teachers from Cordoba devised the syllabus together, we decorated the classrooms, and we opened with a very good enrollment. There are 150 students who are taking 11 classes. The first one ended on Sept. 30 and now we are registering a new course for level zero (introductory)," said Perez.

During a virtual opening ceremony on Friday, UNC rector Hugo Juri said the new institute aims to promote "an East-West corridor of fruitful exchange that contributes to scientific cooperation and the solution of problems common to both nations."

The institute will form part of the university's north campus, where a technology park is currently under development.

Next year, the university's publishing house will launch a collection of China-themed publications.

Future plans also include a course to teach the Chinese language to young girls and boys through "children's rhymes, calligraphy, paper-cutting technique, and the spelling of one's own name," said Perez.

Professors from other Chinese educational institutions have joined the activities of the UNC Confucius Institute, teaching classes on Chinese literature and politics, she said.

"Language is, in principle, the most elementary of gestures people can exchange, in addition to hugs, in addition to gestures of cordiality and courtesy. In addition to offering a plate of food, to speak another's language is to show great interest in them," said Perez, who believes that learning Mandarin nowadays is "essential."