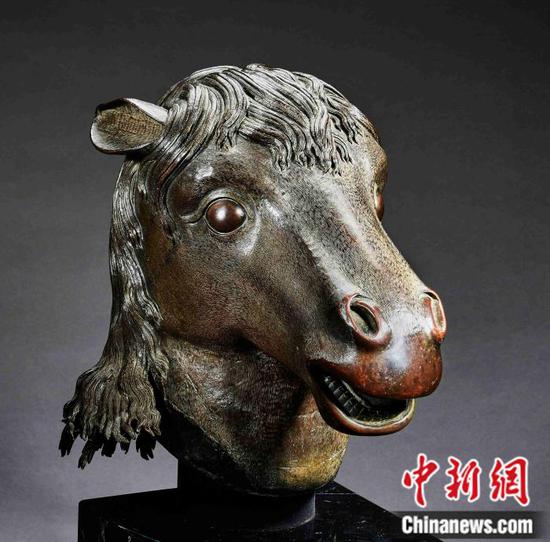 The horse-head statue is among the 12 statues of Chinese Zodiac signs that once decorated a fountain in the Old Summer Palace in Beijing. (Photo/China News Service)

A red bronze horse-head statue was brought back by Macao-based tycoon and collector Stanley Ho Hung-sun and handed over to the National Cultural Heritage Administration in Beijing on Wednesday.

The statue appeared in the National Museum of China on Wednesday afternoon and joined a temporary exhibition on cultural relics that have been returned from overseas since 1949.

First built in 1707, the Old Summer Palace, or Yuanmingyuan, the former imperial resort of the Qing Dynasty (1644-1911) in northwestern Beijing, was often referred to as "the garden of gardens" for its lush landscapes and numerous temples, palaces and pavilions. It covered a 350-hectare area, about five times that of the Forbidden City.

However, the invading Anglo-French Alliance Forces rampaged through the compound and set it on fire in 1860. Numerous national treasures, including the 12 animal-head statues, were taken abroad in the havoc.

The Old Summer Palace gradually became ruins later, which is commonly seen as a national stigma and pain for Chinese people.

The newly returned horse-head red bronze statue was one of 12 decorative taps - in the form of 12 Chinese Zodiac Signs - which were set for a foundation in Xiyang Lou area (or Western Mansions), a group of Baroque architecture in the Old Summer Palace.

These animal-head taps took turns to spray water during different hours within a day, but a salvo would happen only at noon.

The statue was designed by Italian Jesuit artist Giuseppe Castiglione, who served the royal court of the Qing Dynasty. Its production mixed traditional Chinese craftsmanship and Western mechanics.

The statue appeared in Hong Kong for a Sotheby's auction in 2007, and the National Cultural Heritage Administration immediately contacted the auctioneer to register its disagreement at the auction as the cultural relic was stolen from China, and expressed hope that it would be returned to its motherland "in a suitable way in the future".

Ho decided to donate it back to the mainland on 20th anniversary of Macao's return to China on Dec 20, after he contacted the National Cultural Heritage Administration, which said the statue will be given back to the Yuanmingyuan administration.

"In the past 70 years of rescue efforts to reclaim lost Chinese cultural relics, Hong Kong and Macao compatriots have always contributed as indispensable strength," Liu Yuzhu, director of the National Cultural Heritage Administration, said. "Ho is an outstanding representative of that spirit."

In 2003, Ho also donated the pig-head statue of the Old Summer Palace to the mainland. It is also being displayed at the National Museum of China at the same exhibition.

"The broken link of historical memory is thus re-connected," Liu said. "The returns of the relics hold the public's collective emotion. People's cultural confidence can be strengthened. It will also encourage more compatriots' devotion, both at home and abroad, to better preserve cultural heritage of our country."

The horse-head statue is the seventh among the 12 articles from the Old Summer Palace fountain that has returned to Beijing.