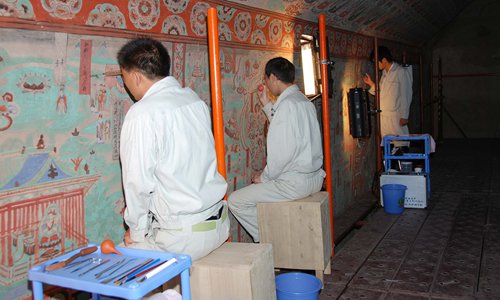 Each cave has Buddha statues and wall paintings illustrating the lives and religions of people from different dynasties, carrying historical and cultural value. Due to old age, changing weather and booming tourism, it suffers from different levels of deterioration.

Cave repairing requires scientific techniques, skills and long years of dedication, which may take 10 years to repair a cave. Despite the difficulties, more than 80 scientists have been working many years to repair and preserve the grottoes.

Due to the weak cemented cliff, weathering and human activities over 1,000 years, multiple types of geological deteriorations have appeared. Meanwhile, the surface of the cliff has become fragile.

Gravel and sand would fall from the caves, threatening the safety of the cultural heritage as well as visitors.

"In the past 100 years, most of the damage has been done by nature, but visits by more tourists will break the original balance inside the caves," said Wang Xudong, former president of Dunhuang Academy, now director and curator of the Forbidden City.

Constant entrance and exit, and changes in temperature and humidity inside the caves have caused deterioration. Human bodies also carry micro-organisms, and if they start to grow inside the caves, it would be devastating for these murals, media reported.

A total of 33,485 tourists visited the caves in the May Day holiday in 2019, a new high for the same period since the grottoes adopted tourist-limiting regulations in 2014, and an increase of 69 percent from 2018, according to the website of the academy. 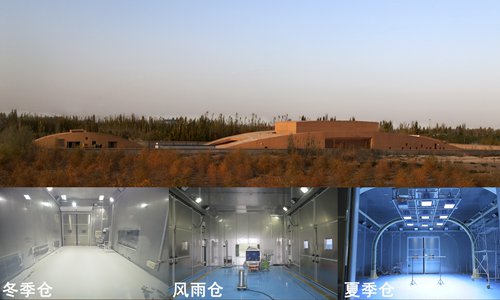 The academy made laboratory cabins for simulation tests to develop materials to protect the murals, China's first such laboratory.

Integrated with real-time monitor technology, big data analysis and the cloud networking synchronization, a "house-sized" laboratory where the environment simulates rain, wind and illumination can hold a large grotto block, Guo Qinglin, the director of  the protection department of Dunhuang Academy, told the Global Times.

The scientists will observe whether the cultural relics painted with protecting materials would change under different environments and whether the relics' aging would speed.

"We have tested the laboratory and plan to officially use it in August or September," Guo said.

"In the past, we had always taken experiments on small samples of the relics, but found some protecting materials which worked well in the samples actually not effective in the caves. We prefer to test the materials on the scene," Guo said.

Beyond developing materials to block murals from degradation, monitoring the grottoes' condition in real time is also important, Wang Xiaowei, director of the monitoring department of the academy, told the Global Times.

"We set surveillance cameras and use drones  to monitor the flow of wind, temperature, humidity and carbon dioxide in the caves," Wang said.

The grottoes were temporarily closed to tourists on July 6 and 17 due to heavy rain. "The rain caused the humidity of the grottoes to rise and if the monitor finds the relative humidity exceeding about 60 percent, the grottoes will be closed temporarily, "said Wang.

As ancient murals in the grottoes are in danger of disintegrating, scientists are desperately trying to digitize the important relics before they are gone forever.

The digitized Mogao caves, e-dunhuang.com, has become popular in the field of cultural relic preservation. On the site, anyone from around the world can view 360-degree panoramas of the caves as they virtually navigate around in high resolution without actually setting foot in the caves.

Since 1989, the Getty Conservation Institute (GCI) in the US has been working with the Dunhuang Academy (DA) on conservation at the Mogao Grottoes.  The first five years of collaboration addressed site-related issues. Since 1997, the collaboration has focused on the conservation of wall paintings at the site but also on training and visitor management, according to the GCI website.

Chinese and Japanese researchers are working to "clone" statues and murals at more than 100 grottoes to save the ancient works of art from the teeming number of visitors to the site each year, Japanese media Asahi Shinbun reported.

The academy has also cooperated with experts from Oxford University on monitoring and repairing the weathering caves since 2017.

The academy and Kyrgyz authorities have been working together to protect, digitize and present their findings in archaeological missions in Kyrgyzstan since 2017. It was the first such cooperation between the academy and a central Asian country along the ancient Silk Road in response to the Belt and Road Initiative, Xinhua News Agency reported.