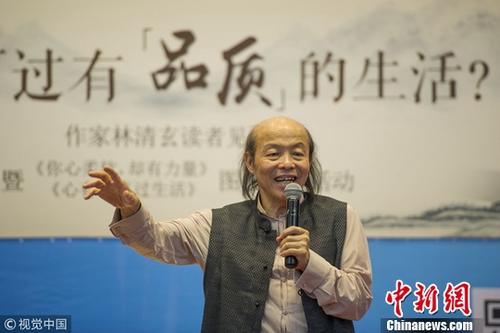 Lin Qingxuan, a Taiwan-born writer gaining popularity across the Straits, died at the age of 65, according to Taiwan media.

Born in 1953, Lin Qingxuan was a famous writer, essayist, poet and scholar who was honored with numerous prizes.

Raised in Kaohsiung city, Taiwan, he graduated from Shin Hsin University. While in college, he published his first book Lian Hua Kai Luo in 1973. After that he began working as a journalist for several years before devoting himself to writing essays.

On Jan 22, Lin made a final post on Sina Weibo, China's answer to Twitter. "I think the death of the sparrow gives me some inspiration," he said. "Although we live in a world with dust and restrictions, we should never loses the interntion and ability to fly."

He was one of the most prolific writers in Taiwan and was hailed one of the "eight major writers of contemporary prose."