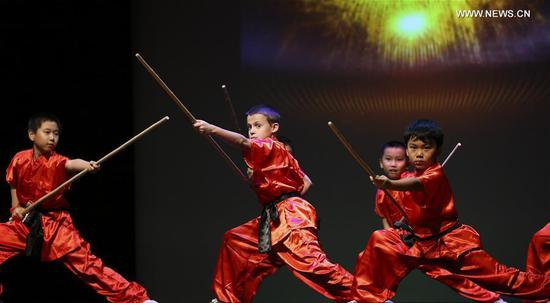 A Chinese Kung Fu gala, performed by Chinese and U.S. Kung Fu masters in the San Francisco Bay Area, is expected to ignite the local people's enthusiasm for Chinese martial arts and promote cultural exchange between China and California, said organizers on Monday.

The "Kung Fu Night" will be presented by 10 teachers and students from China's Capital Institute of Physical Education (CIPE) and nearly 20 Kung Fu schools in the Bay Area on December 15 in Santa Clara, California.

Organized by the Fuji Foundation and the American Shandong Chamber of Commerce, the event has been held five times in the Bay Area to promote the culture of Chinese Wushu, or martial arts, and bring the essence of Chinese Wushu to more overseas audiences.

"As a Wushu practitioner, I always regard promotion of Wushu spirit as my responsibility. The gala provides a platform for Wushu practitioners in China and the United States to exchange ideas and skills," Zhao Qingjian, director of the gala, told a press conference held on Monday in San Jose, California.

"I also hope it will stimulate people's enthusiasm in the Bay Area and provide an opportunity for the American people to better understand Chinese martial arts culture," he said.

"Chinese Wushu is a treasure of Chinese traditional culture. With a long history, profound meaning and unique glamor, Chinese Wushu is well known in the world," Chinese Consul General in San Francisco Wang Donghua said in a letter dated December 3 to the organizers.

"Kung Fu Night gathers friends through exchanging skills and promotes the spirit and wisdom of Chinese Wushu overseas as well as athletic exchanges between Chinese and American peoples," said Wang.

The gala, which will last nearly two hours, will show more than 20 performances with distinct skills and attract an audience of 500 people, according to Zhao, also Wushu champion of the 2008 Olympics and a teacher at the CIPE.

Each of the participating Kung Fu schools, including Thunder Kungfu Academy, Dragon Rhythm Shaolin Kung Fu, and Feishifu Kungfu, will display their own unique skills, such as combative form, competitive form and health-preserving Qigong, said Zhao.

All the performances follow the principle of "high quality, difficulty, beauty and innovation," and adopt the skills of dancing to highlight the visual effect, he said.

Zhao himself will join the teachers and students of the CIPE to perform the finale "Soul of Wushu." The 30-minute program will feature broadsword, spear, sword and staff styles.

In a certificate of recognition, Chu, on behalf of the California State Assembly, commends their "dedicated efforts in our community to promote Chinese culture, martial arts and assist in Chinese American friendship."