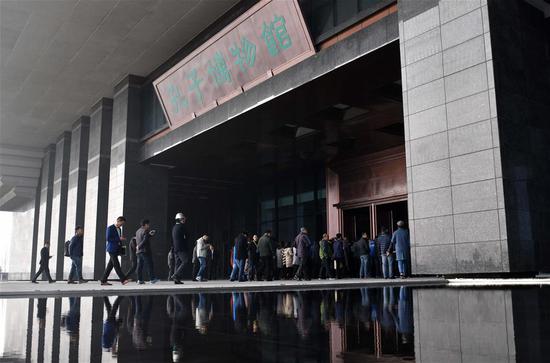 Mysterious relics from the Confucius Family Mansion can be seen by the public for the first time from Monday, after being kept as a private family collection for centuries.

The Confucius Museum in Qufu, in east China's Shandong Province, birthplace of Confucius, began trial operation Monday, exhibiting 2,000 relics from the historical residence of the direct descendants of Confucius since the Song Dynasty (960-1279).

Over the years, the Confucius Family Mansion, a UNESCO World Heritage site, has received many visitors from home and abroad. But few people have glimpsed the treasures that have waited for centuries to tell the history of the family.

"This is the first move to a new home for the Confucius family relics and will also be the largest exhibition open to the public," said Kong Deyong, 93 and a 77th-generation descendant of the revered Chinese philosopher.

Teachings and philosophy of Confucius (551-479 BC) have deeply influenced the Chinese and east Asians. He was also the first Chinese person to set up private schools and enroll students from all walks of life.

The museum, 5 km from the mansion, was designed to house 690,000 cultural relics from the Confucius Family Mansion. The remaining relics will be transported to the museum and displayed later.

The relics, including ceramics, jadeware, bronzeware, gold and silver objects, books, drawings, clothing and family archives, are believed to embody the family tradition of Confucius valuing ritual and education, and show the ups and downs of the family as well as social changes over the centuries.

Thirty-one generations of Duke Yansheng, a title bestowed on the eldest male in each generation of the main line of descent of Confucius in accordance with an imperial tradition dating back to 1055, had lived in the mansion.

The first group of relics, including a set of bronze sacrificial utensils from the Shang and Zhou dynasties (1600-256 B.C.) and well-preserved imperial robes from the Ming Dynasty (1368-1644), has an estimated value of more than 400 million yuan (about 57.6 million U.S. dollars).

The ancient sacrificial utensils, considered a national treasure, were a royal gift from Emperor Qianlong of the Qing Dynasty (1636-1912), after he attended a worshiping ceremony at the Confucius Family Mansion, according to Chu Hongxuan, a museum staff worker.

"The emperor's gift, which the family took great pride in, had been well stored and never been shown to others," said Kong, who lived at the mansion between 1937 and 1945. "It was once buried underground to escape the plundering of the invading Japanese army during wartime."

"Bronzeware of the Shang and Zhou dynasties boast high quality and rich patterns, and this set of sacrificial utensils was well-designed and decorated, thus being of great archaeological significance," said Kong Xiangjun, director of the cultural relics protection department of the Confucius Museum.

Among the first group of items on display are 60 pieces of well-protected Ming Dynasty clothing, mostly official costumes, and portraits of Duke Yansheng from many generations.

"Such a large amount of exquisite Ming Dynasty clothing can only be found in the Confucius Family Mansion," said Kong Xiangjun. He said rulers in the following Qing Dynasty had banned official costumes of the Ming Dynasty, but allowed the Confucius family to retain them.

Other existing clothes of the Ming Dynasty are mostly from excavated tombs and have faded and been damaged, he said.

"It was impossible to keep all relics properly preserved in the smaller archive at the Confucius Family Mansion, and the much bigger and more modern museum will better meet the needs of protection, restoration and exhibition and scientific research of the relics," Kong Xiangjun said.

"The museum employs latest technologies in acoustics, light and electronics to make some of the relics come alive and thus strengthen interaction with the public," said Zhang Lie of the Academy of Arts and Design of Tsinghua University, who is in charge of the exhibition design.

For example, with several touches on a wall equipped with AR technology, classic words from the Analects of Confucius -- a collection of ideas and sayings from the Chinese philosopher -- will pop up with graphic stories behind them at the same time.

"People will get to understand that if one wants to learn traditional Chinese culture, he should first get to know Confucius," said Yang Jinquan, deputy curator of the museum.

"I've gotten to know how Confucius spent his life and how he taught. Now I have a better and more vivid understanding of Confucius," said Kong Lingying, a local fifth grader who toured the museum with her classmates Monday.