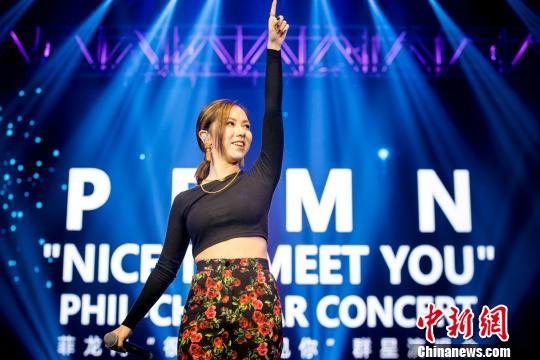 Gloria Tang Tsz-kei, who also goes by her stage name G.E.M., is one of the most successful female pop stars in China and was recently ranked 34th on the BBC 100 Women's list.

"G.E.M. is a top-selling female musician who uses her influence to support charities and organizations dedicated to music, education and poverty," the BBC wrote.

Born in Shanghai, the 27-year-old singer-songwriter made her debut on the Hong Kong music scene 10 years ago at age 16. In the same year, G.E.M. released her first EP “G.E.M.” on Oct. 16 and won several gold awards for new female singer in Hong Kong.

On Jan 5, 2016, G.E.M. was selected by Forbes as one of the world's 30 most promising and outstanding musicians under 30. Today the young performer boasts 28 million followers on Weibo, China's most popular social medium platform. And she is also the model of the last superhero created by Marvel creator Stan Lee.

G.E.M launched the "rhythm of childhood" public benefit campaign in 2015 to raise funds for building music classrooms and playgrounds for rural children. In 2017, G.E.M. and her friends took part in a reality show, with proceeds being donated to organizations that support children with special learning needs along with their parents. 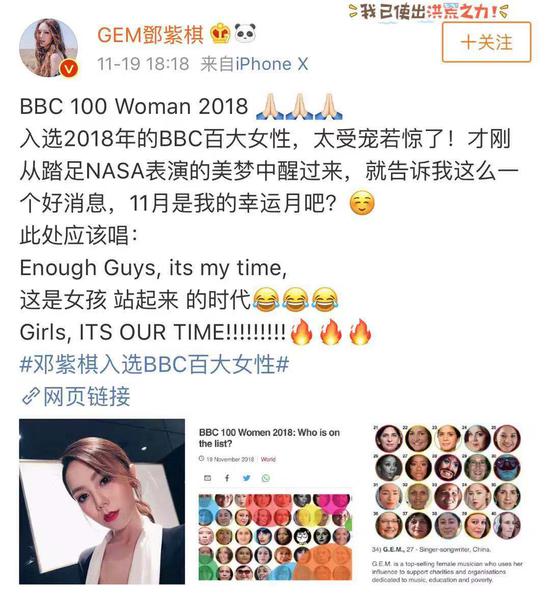 “The BBC 100 Woman 2018, being including in the BBC 100 women of 2018 is so flattering! I was told the news after waking up from the sweet dreams of performing at NASA. November must be my lucky month, and I should sing ‘Enough Guys, it's my time'! It's the time for girls to stand up, Girls, IT'S OUR TIME,” G.E.M. wrote on Weibo after hearing the news. The post has been retweeted over 70,000 times.

The BBC 100 Woman is an annual list of the 100 most inspiring and influential women ranging in age from 15 to 94, from more than 60 countries and includes leaders, trailblazers and everyday heroes.

Topping this year's list was Abisoye Ajayi-Akinfolarin, a 33-year-old social impact entrepreneur in Nigeria, who founded a GirlsCoding, a non-governmental organization that teaches girls how to code, design and build websites and help solve problems in their communities.

Two other outstanding Chinese women have been included in this list.

As an independent photographer, Luo Yang has captured young Chinese women who are “independent, free and dare to dream” since 2007. She ranks 97th on the list.