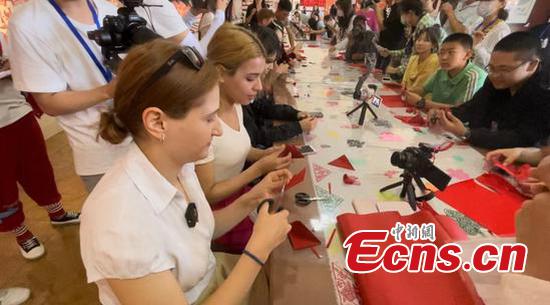 Zhao has been engaged in papercutting for more than 30 years since she began to learn the art when she was eight. She has won more than 120 prizes, with works exhibited abroad many times.

In 2014, she was selected as the representative inheritor of the paper project on Inner Mongoliaintangible cultural heritage.

Series works she has cut together with her apprentices present Chinese history from ancient times till today, including the improvement of farming tools with a total length of about 500 meters long.

"This is a rare opportunity to learn about Chinese folk art papercut. Zhao is very creative and I admire her a lot. Chinese culture is profound and has a long history," said Safa Taboubi from Tunisia.

Except for papercutting, the foreign internet celebrities have also learned to make dough figurines during this activity. 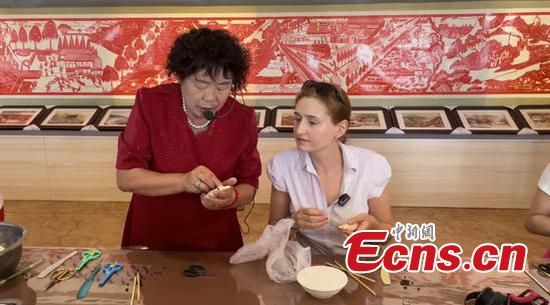 Zhao also trained unemployed women and villagers nearby to learn papercutting techniques for free, helping them increase their income.

As for inheritance, Zhao hopes to promote her papercut skills and let more people learn and protect this traditional Chinese culture.

With a history of more than 1500 years, papercutting originated from ancient China's Northern and Southern dynasties (420-589) and prospered during the Ming and Qing dynasties (1368-1911).