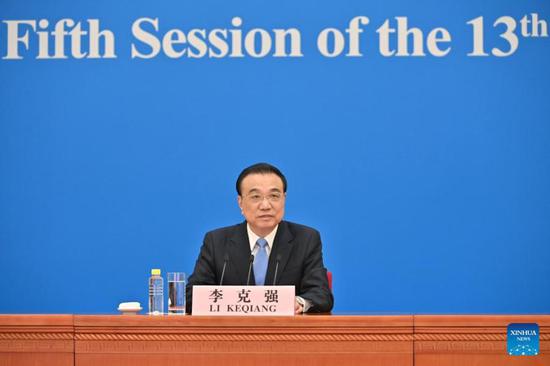 Chinese Premier Li Keqiang meets the press after the closing of the fifth session of the 13th National People's Congress (NPC) in Beijing, capital of China, March 11, 2022. Li took questions from Chinese and foreign journalists via video link. (Xinhua/Li Xin)

Chinese Premier Li Keqiang held a press conference on Friday to answer questions from Chinese and foreign journalists via video link after the closing of the fifth session of the 13th National People's Congress.

The following are the highlights of the press conference.

Chinese Premier Li Keqiang expressed the hope that the situation in Ukraine would ease and peace would return as soon as possible.

Tax and fee reduction is the most direct, fair and effective measure to help businesses, Premier Li said Friday.

The number of market entities in China has reached 150 million amid the country's efforts to improve business environment, Li said Friday.

China will continue to make its COVID-19 response more scientific and targeted based on the epidemic situation and new developments and features of the virus, Premier Li Keqiang said Friday.

Li said China will prevent and control the epidemic to protect people's life, health and safety to keep up the normal running of work and life, and ensure security of industrial and supply chains.

China's opening-up policy will not change, Premier Li Keqiang said Friday after the closing of the fifth session of the 13th National People's Congress.