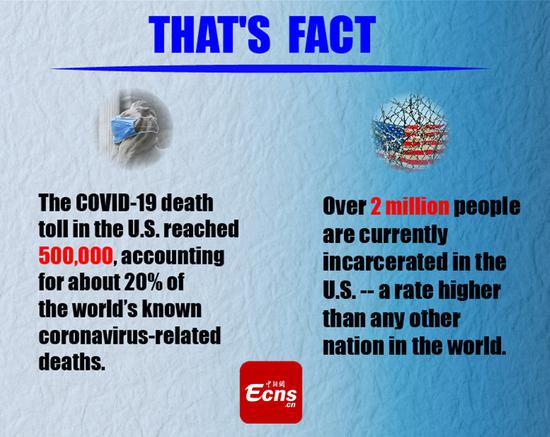 (ECNS)--American comedian Lee Camp made a rather ironic scene in his program "Redacted Tonight" recently. He came on strong with "critics" of China's COVID-19 control measures, race and human rights issues, then found himself "misreading the script". What he said about China is instead what's happened in America. It turns out Americans cannot stand the farces in America anymore.

To date, over 500,000 Americans have died of the COVID-19, accounting for about 20 percent of the world's death toll, according to Johns Hopkins University. However, its morbid anti-China psychology makes America not only fail to reflect on its domestic epidemic control, but politicalize the origins tracing of the COVID-19 in a bid to target China.

The U.S. keeps slandering China for implementing "genocide" in Xinjiang Uygur Autonomous Region though its history has recorded a sharp drop of the population of Indigenous Americans; AFP reported that the number of blacks shot by American police is three times that of whites, refugee children were confined to “cages”, according to the Associated Press; it has also waged many times of wars since World War II….

How dare such a country with so many inhuman stains criticize others under the pretext of "violating human rights"?

Camp's complaints about the U.S. has revealed the country's strategies on human rights issues manipulation – it practices double standards and fabricates stories. It keeps stirring human rights issues of China by fabricating lies but these are untenable.

There are still Americans with sense of humor and conscience who have already been tired of American politicians covering up their incompetence by defaming China endlessly.

If the U.S. continues to ignore its own poor human rights situation and distract its people by vilifying China, more Camp-like Americans will see through the tricks of American politicians finally.