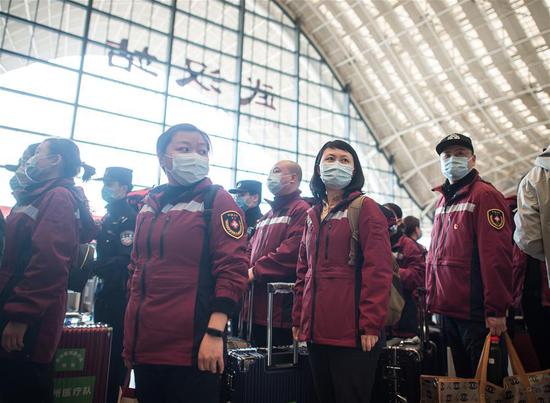 (ECNS) -- Quiet for more than a month, Wuhan Railway Station in Hubei Province has been witnessing the cheerful and tearful departures of many medical teams, now that the novel coronavirus had been brought under control there.

The first batch of 3,787 medical workers from 49 teams across China left the city on Tuesday.

They had served in 14 makeshift hospitals and seven designated hospitals in Wuhan, the once hardest-hit city by the novel coronavirus.

"I have only stayed here for 43 days, yet I'm attracted to it, not only because of its charming scenery and delicious food, but also because of the people here,” said Fan Rui, a nurse with the Ningxia Medical Team.

An elderly patient invited Fan to climb the Huanghelou, or Yellow Crane Tower, visit the city's famous cherry blossoms, and eat the local crayfish delicacy after the city recovers.

"Although it is the first time for me to be here in Wuhan, it feels like a second home," Fan said.

"When the cherry blossoms bloom next year in Wuhan, I will come to visit with my family," said Li Kanghua, deputy team leader of the first batch of medical workers to Hubei Province from Hunan Province.

About 3,000 police officers were dispatched to salute the departure of the medical teams along their route.

You are the angels of light, messengers of hope, and true heroes, said Wang Zhonglin, Party secretary of Wuhan. "The people of Wuhan will be grateful to you forever."

Local residents under self-quarantine cannot say farewell in person, so they say thanks in their hearts. Some made comments on social media: "Take a good rest, and come back to Wuhan next year when the cherry blossoms bloom!"