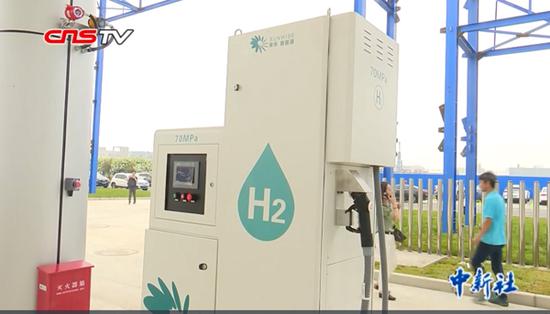 The megastation covers 8,000 square meters and can supply more than two tons of hydrogen each day.

With a high energy conversion efficiency and zero emissions, hydrogen fuel cells are regarded as one of the main developmental directions of the new energy automobile industry.

Shanghai launched the hydrogen vehicle sector earlier in China, rolling out a research and commercialization plan in 2013. The city has made progress in key technologies and expanding its industrial scale since then.

The Shanghai Commission of Science and Technology disclosed that the city will build five to 10 hydrogen stations by 2020 and ensure 3,000 hydrogen-powered cars.

In 2018, SAIC Motor and Shanghai Chemical Industry Park signed an agreement to develop China's leading fuel cell vehicle and pilot the use of hydrogen. In the last month, a development plan was drawn for hydrogen fuel cell vehicles in the Yangtze River Delta.