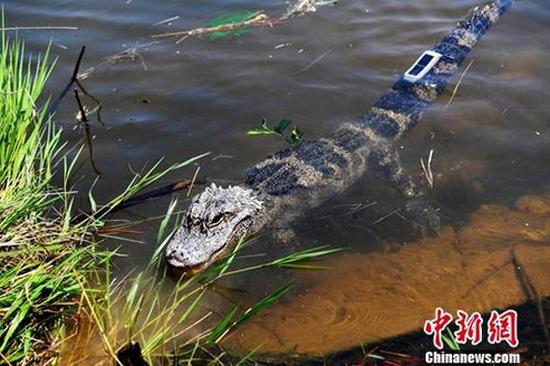 A total of 120 artificially-bred adult Yangtze alligators were released to nature on Monday at the Anhui Yangtze Alligator National Nature Reserve in east China.

The Yangtze alligator, also known as Chinese alligators, is a rare species unique to China. It is also under national first-class protection. At present, the number of Yangtze alligators in the wild is only about 200, which is classified as extremely endangered.

The 120 alligators are between six and seven years old, comprising 90 females and 30 males.

From 2003 to 2018, the reserve had released a total of 108 Yangtze alligators to the wild. According to the monitoring data, these alligators spawned 224 eggs and 112 baby alligators were naturally hatched.

"Before each reintroduction, we would definitely inspect all releasing ponds. We would replenish the food at each location and install monitoring devices in key areas to monitor the alligator activities, research projects, and possible man-made damage if any," said Wang Honggen, director of Langxi County Management Station, Anhui Yangtze Alligator National Nature Reserve Authority.

The alligators were released to a designated area in the nature reserve which provides ideal conditions for reintroduction.

"There are a total of 49 releasing ponds. According to the ecological environment and capacity of the ponds, we distributed the 120 alligators to each pond. Some might have three alligators and some seven or eight," said Zhang Song, director of Department of Animal Management of the reserve authority.

In order to accurately and timely know the survival status of the 120 Chinese alligators in the wild, before the release, they were all implanted with ID chips and 18 had satellite trackers fixed on their tails.

"Through this tracker, we can see the scope and the amount of alligator's activity. Through these parameters, we can see where the alligators like to go," said Dai Chao, monitoring engineer of Yangtze alligator satellite tracker.

At the reserve, the number of Yangtze alligators living in the wild has significantly increased through the conservation and wild introduction.

Currently, there are more than 16,000 artificially bred alligators in the reserve, with an annual breeding capacity of around 1,500, which ensures the source of alligators for wild reintroduction.

"The real role that a species is playing in nature should be in the wild, in the natural ecosystem. So reintroduction is quite necessary," said Wu Xiaobing, professor at Anhui Normal University.

"After three to five years, the number of wild populations can reach 260 to 300. The ultimate goal is that we want the Yangtze alligators to revive in the wild, and the wild population can be free from extreme endangerment," said Wu Rong, director of the reserve authority.