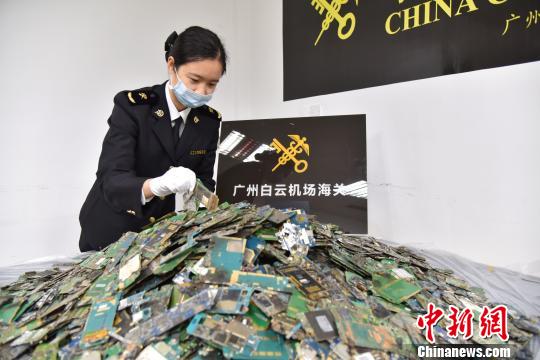 (ECNS) - Three foreign passengers were found carrying 195 kg of old electronic parts deemed to be prohibited solid waste as they arrived at Baiyun International Airport in Guangzhou, Guangdong Province, according to local customs on Tuesday.

The three arrived in Guangzhou from Addis Ababa, capital of Ethiopia, each with two boxes weighing up to 66 kg. Inspectors found the boxes were filled with used electronic parts such as circuit boards.

The passengers claimed they helped other people transport the goods without personally being aware of their function. They are now facing further investigation by anti-smuggling authorities.

Lin Dingshan, a customs officer at the airport, said illegal solid waste banned from entering the country has been discovered 34 times since the start of this year. Mainly circuit boards and old phone screens, it weighed a combined 2.03 tons.

Guangzhou Customs has improved efforts to crack down on waste smuggled into China as part of the ’Blue Sky 2019‘ campaign run by the General Administration of Customs.