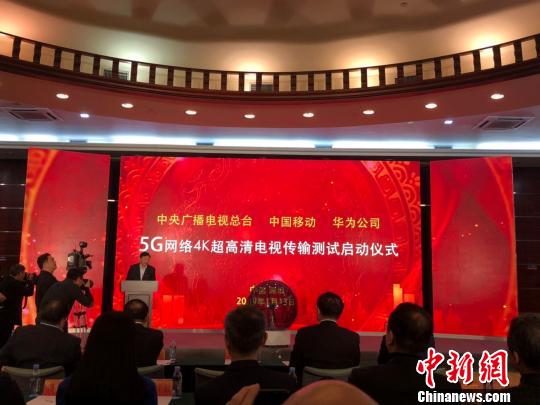 A test for the broadcast using a 5G network is conducted at the launching ceremony in Shenzhen, Guangdong Province, Jan. 13, 2019. (Photo/China News Service)

(ECNS) - The Spring Festival Gala, a Chinese New Year special produced by China Central Television, will be broadcast live in 4K high-definition through the 5G network after a successful test in Shenzhen.

In addition to the main studio in Beijing, the 36th edition of the lunar New Year gala will have a separate studio in Shenzhen, a hub of Chinese technology companies.

China Media Group, China Mobile, and Huawei conducted a successful test Sunday evening for the broadcast using a 5G network slice established by China Mobile, making sure the programs performed in Shenzhen and Beijing could be transmitted between the two sites in high definition.

Shen Haixiong, president of China Media Group and Wang Weizhong, deputy Party chief of Guangdong Province, were among the participants to launch the test in Shenzhen.

Shen Haixiong, president of China Media Group, said the group is going to roll out a "4K+5G+AI" strategy by taking advantage of big data and Artificial Intelligence.