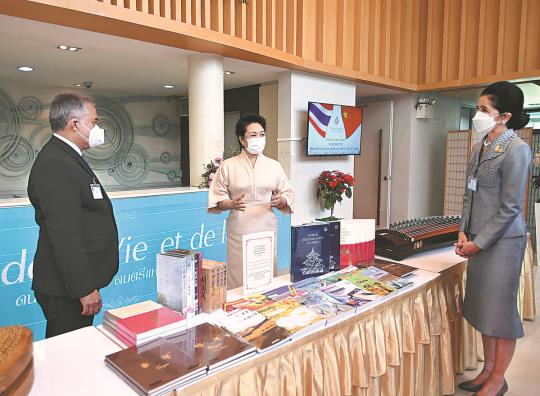 Peng Liyuan, wife of President Xi Jinping, highlighted the role of music in fostering a closer bond between the peoples of China and Thailand as she paid a visit to the Princess Galyani Vadhana Institute of Music in Bangkok on Saturday.

Peng was warmly welcomed by Naraporn Chan-o-cha, wife of Thai Prime Minister Prayut Chan-o-cha, and Anek Laothamatas, Thai minister of higher education, science, research and innovation, as well as senior executives of the institute upon her arrival. The institute's students waved flowers along the streets as the band played.

Peng, accompanied by Naraporn, visited the exhibition room of the institute and listened to a briefing on its history and international cooperation.

She expressed delight at the cooperation between the institute and China's Nanjing University of the Arts.

Peng watched a joint performance given by the two institutions, with students from the Nanjing University of the Arts performing via video link. On the playlists were classic songs of both nations.

Peng applauded the performances, before expressing her appreciation for late Thai princess Galyani Vadhana for advocating the establishment of the institution, which is dedicated to training top-notch music talent.

She also conveyed appreciation to Naraporn for promoting the cooperation between the institute and Chinese colleges.

Music knows no borders, Peng said. Although the two nations have different languages, music can serve as a bond to the hearts of the two peoples, she said, adding that through the performances she feels that China and Thailand are as close as one family.

Peng presented to the institute gifts including a guzheng, or Chinese zither, as well as books and audiovisual products about Chinese culture and music, in the hope that more young Thai people can learn Chinese instruments and promote bilateral cultural exchanges.