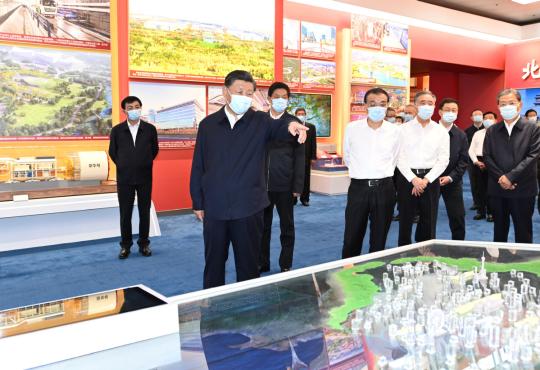 President Xi Jinping called on Tuesday for the entire Chinese people to unite in writing a new chapter in comprehensively building a modern socialist country and securing new victories for socialism with Chinese characteristics.

Xi, who is also general secretary of the Communist Party of China Central Committee and chairman of the Central Military Commission, made the remarks while visiting an exhibition in Beijing showcasing the great achievements the Party and the nation have made over the past decade, since the country entered the new era.

Since the 18th National Congress of the CPC in 2012, the CPC Central Committee has united and led the whole Party and people from all ethnic groups nationwide in addressing difficulties that could not be overcome for a long time, and succeeded in dealing with many issues that matter to the nation's long-term development, as well as withstanding political, economic, ideological and natural risks and challenges, Xi said.

The cause of the Party and the State has made historical achievements and undergone historical transformations, and these have provided support for national rejuvenation in terms of improved systems, a strong economic foundation and massive intellectual strength, he added.

Xi urged efforts to make people know more about the strategic measures, reforms, important progress and achievements the nation has made over the past decade to enable them to better understand the landmark significance of the great transformations in the Party's history as well as in Chinese history.